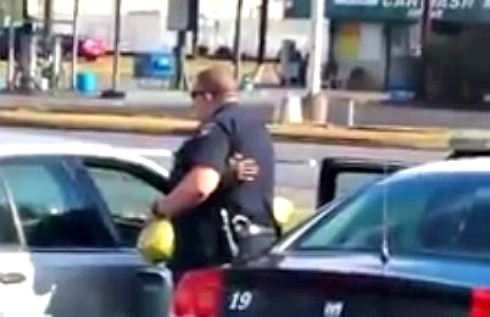 An Alabama police officer called when a woman was caught shoplifting eggs gave the woman more than a second chance — he spent his own money on the eggs for her hungry family.

Tarrant Police Chief Dennis Reno told AL.com that Officer William Stacy was called to Dollar General when employees caught Helen Johnson trying to steal one dozen eggs. Upon talking with her, Officer Stacy learned Helen was desperate to feed her hungry grandchildren, who were waiting in the car.

“He said, ‘If I give you these eggs, will you promise that you won’t shoplift anymore?'” Police Chief Reno said, explaining the Dollar General agreed not to prosecute. “He knew that she was telling the truth and that’s the reason he went in and bought the eggs.”

When he gave the eggs to her, Helen asked whether she could pay him back with a hug. That sweet scene was caught on camera by another shopper, who later posted the video on Facebook.

After the story went viral, Helen told AL.com she’s “never been more grateful.” She explained the family — which includes two daughters, a niece and two grandchildren — hadn’t eaten in days because her daughter’s welfare check was lost in the mail and her disability check wasn’t due to arrive for another few days.

She said she thought she had enough to buy the eggs, but didn’t account for the tax. Out of desperation, she stuffed five of the eggs in her pocket.

“Of course when I put them in my jacket pocket they broke,” she said. “I’m not a good thief at all.”

When approached by employees, she immediately confessed and expected charges would be pressed. So, when Officer Stacy instead offered to buy the eggs, she was shocked.

Officer Stacy said he was glad to help and just hopes Helen doesn’t try to steal again. The Tarrant Police Station also gave her a basket from their holiday food drive and helped her sign up for their toy drive. Police Chief Reno added, “Police officers do this all the time… We ask them to take appropriate action, but there are different kinds of actions that you have to take on each individual case.”