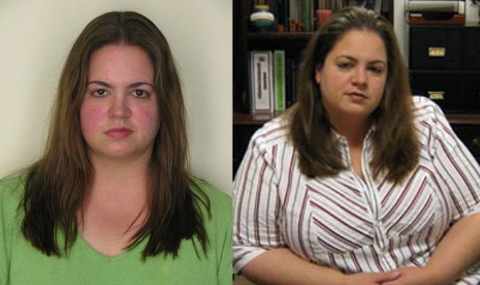 Come on down to the Sunshine State!  In another case of a school authority turned perv in Florida we now have Middleton High School Assistant Principal Lauren Tilo arrested for sending a photo of her breasts to a 14 year old boy that she met playing Worlds of Warcraft.  The boy in question told LiLo(sorry Lindsay) Tilo on different occasions that he was under-aged.  This did not deter Lauren from keeping the lines of communication open.  She even let the boy know that she was a school administrator!

In a report filed by 10connects.com we can see video of the accused Tilo taking that long walk of shame from Hillsborough County Jail:

In one of the messages sent by Tilo to the young boy she allegedly said:

Tilo has been charged with Transmission of Harmful Materials to a Minor.  It’s interesting to note that the sexually charged conversations and communications would not have been illegal according to Florida law, it was when she allegedly sent the boob-shot via her cell that she broke the law and it became a felony.

Mothers discover their babies were switched at birth after chance encounter