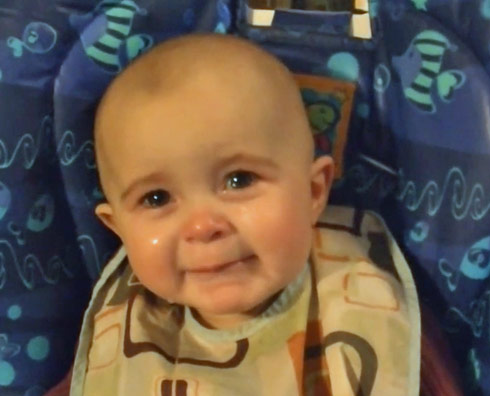 Watch as 10-month-old Mary Lynne Leroux appears to be moved to tears as her mommy sings Rod Stewart’s, and later Sara Evans’, ballad “My Heart Can’t Tell You No” to her.

As is always the case when it comes to videos involving a baby, there’s been various takes on what is actually going on here. Some believe little Mary Lynne is actually being “tortured” by her mom, arguing her voice is too loud and are exasperated as to how she could continue to film this poor child crying without picking her up and consoling her. Others have argued that she’s just reacting to the emotions expressed via her mother’s face, while some think it’s a beautiful representation of the bond between a baby, her mommy and the power of music.

The clip was posted back on October 18 with the caption, “She’s was only ten months old when this video was taken, her reaction is priceless!!!!!” It has just recently started making the viral rounds.

VIDEO Morrissey gets hit in the head with a bottle, walks off stage

You Oughta Know: Who is Alanis Morissette’s new husband Souleye?