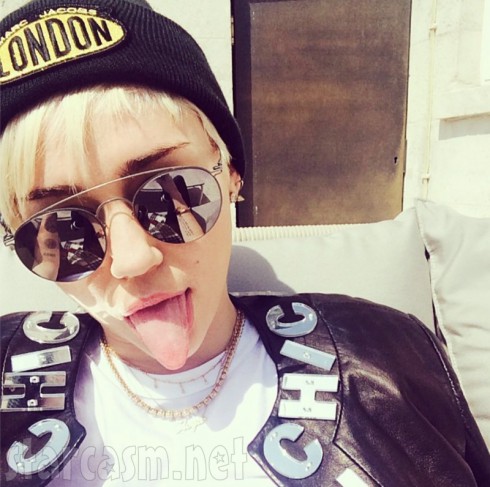 After being sidelined by a severe allergic reaction to antibiotics, Miley Cyrus returned to the stage in London last night for her Bangerz tour. And, apparently on a health kick after her extended hospital stay, Miley doled out some interesting advice to her fans: ditch cigarettes and stick to weed.

“Smells like someone’s been smoking in here and not smoking the good stuff… I bet your breath right now stiiiinks. You know what? Weed has never killed anybody,” Miley said to loud applause. “So instead of smoking cigarettes, go ahead and roll a fat joint.”

Listen, I used to smoke. I smoked for three years and they were the best three years of my life… But they slowly started to kill me and I started looking old. And I’m only 21 and I shouldn’t have those f**king lines right there (pointing to around her mouth) and I was starting to. And no one wanted to make out with me. And, then the minute that I started rolling all these joints and I didn’t smoke cigarettes anymore, I could get any guy and girl to f**king make out with me because my breath smelled so nice… So I love cigarettes, but I’m a singer and I can’t smoke so now I’m trying to bring you guys all down with me and make you not smoke either because I’m f**king pi**ed off that I can’t have a cigarette. So, to be honest, I’m f**king pi**sed I can’t smoke cigarettes and I wish cigarettes didn’t kill people because then I would f**king smoke all day because they are so delicious. But weed is much better and weed won’t kill you.