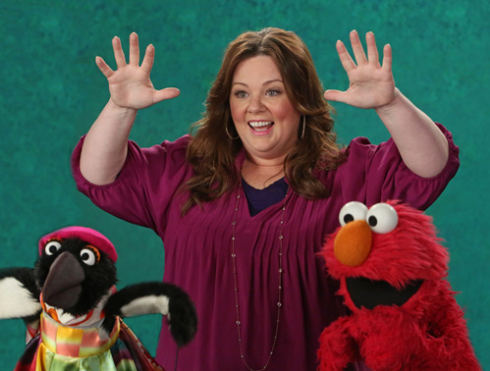 No doubt actress Melissa McCarthy is one of the funniest women working in Hollywood today. From playing chef Sookie St. James on Gilmore Girls to starring as Molly Flynn-Biggs on the CBS sitcom Mike & Molly to the playing the hilarious show-stealing (and Oscar-nominated) role of Megan in Bridesmaids, to hosting Saturday Night Live, to most recently playing lead Diana in the box office hit Identity Thief, she has one of the most impressive comedic resumes of the last ten years. But there was still one glaring omission from her comediculum vitae — one road left to travel… Sesame Street!

But now Melissa can cross that off the list as well after starring in an adorable skit with Elmo as the two learn a dance from a choreographing penguin:

Melissa and her husband (Bridesmaids co-star and hoagie-eating sex partner) Ben Falcone have two children together, Vivian (5) and Georgette (turns 3 tomorrow!), and I’m sure for them having mom goofing off with Elmo was the pinnacle of her career so far! (Unless she has at some point posed for photos with either Justin Bieber or One Direction. Sorry Elmo.)

Melissa is not the only celebrity to guest-star on season 43 of Sesame Street; the celebrities on this season include Steve Carrell, Ed Helms, Halle Berry, Jon Hamm, Joseph Gordon-Levitt and Zac Efron, among others.

Watch Ray Stevens ‘We the People’ video plus lyrics