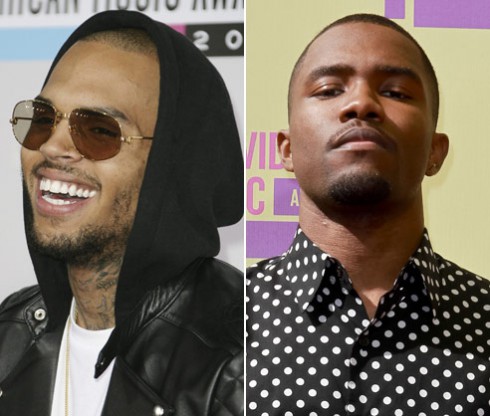 It looks like things got a little too Breezy around the Ocean last night in Los Angeles as Chris Brown and Frank Ocean got into a brawl… Over a parking space.

According to Thirty Mile Zone, Brown was at the Westlake recording studio last night listening to one of his recording artists. When he got finished, he headed out to his ride only to discover that Frank Ocean’s crew had blocked him in. Sources stated that Ocean told Brown, “This is my studio, this is my parking spot.”

Brown tried to make peace by shaking Ocean’s hand when one of Frank’s posse attempted to attack Chris. Someone with Chris stepped in and proceeded to lay a fist on the dude trying to come at Brown. This was said to have escalated to the point of Brown and Ocean brawling it up soul-singing man vs. soul-singing man in the parking lot.

Cops were called but when they arrived Breezy had blown out with the breeze. Ocean hung around and spoke to police on the scene. There’s currently an investigation underway and L.A.’s finest are looking to have a word with Brown. 6 people are now believed to have been involved in the ruckus.

Ocean told the authorities that the fight started over a parking space and that Brown punched him. He later tweeted:

The two had a prior Twitter beef (because when you roll hard you gotta defend your Twitter-turf and parking spaces apparently), taking turns making underhanded comments about each other.