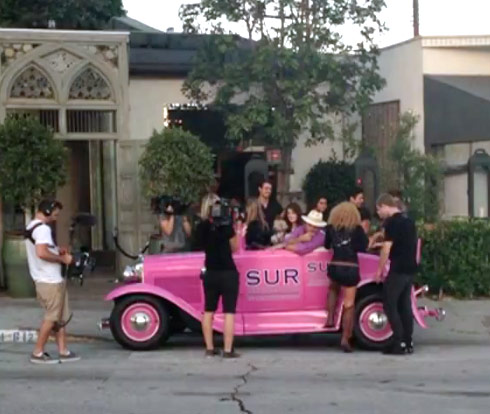 Lisa Vanderpump is hard at work on her Real Housewives of Beverly Hills spin-off. The upcoming series, tentatively titled SUR, takes place at her swanky West Hollywood restaurant SUR Lounge, and Thursday she was spotted filming the opening credits — in a pink hot rod convertible. Would you expect any less from Mrs. Vanderpump?

Just one week after wrapping production on Real Housewives of Beverly Hills, Ken Todd caused a commotion when he arrived at SUR Lounge dressed in a lavender shirt and driving a bright pink 1931 Cabriolet. He picked up Lisa and her adorable pup Giggy and rode off into the sunset with all of the waiters and waitresses looking on.

Bravo announced the new series way back in April. The press release was as follows:

Lisa Vanderpump opens the salacious kitchen doors of her exclusive Hollywood restaurant and lounge, SUR. Declaring it the sexiest establishment she’s ever owned and “the place you take your mistress,” Lisa rules over her lively and mischievous staff with a platinum fist.

One of the waitressses at SUR Lounge, recently spoke with Wetpaint about the series. “Everyone who works there, we’re all good friends. Even when we’re not working, we hang out together constantly. We’re really a family. As much as we love each other, you put a bunch of good-looking, talented, and competitive people together, it’s not going to be all sunshine and roses. There’s never a dull moment, I can promise you that!” 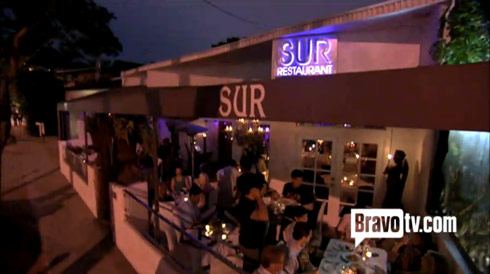 Ken also spoke out about his wife’s latest venture, telling Wetpaint, “I’m so proud of her. She works hard and she deserves this. She’s a wonderful lady and she really knows what she’s doing. We’re both very excited about the new show.”

Lisa and Ken are both listed as executive producers on the series.