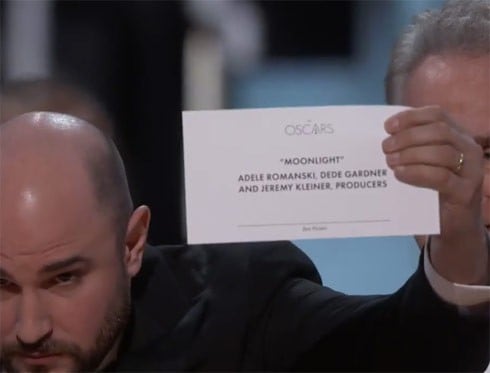 The most memorable moment from the 2017 Academy Awards turned out to be an epic flub.

Veteran actors Warren Beatty and Faye Dunaway were tasked with handling the announcement of the evening’s most prestigious prize, Best Picture. There was an uncomfortably long pause after Beatty opened the envelope. Following some awkward laughter, he handed the card to Dunaway who quickly announced that La La Land, the odds-on favorite heading into Hollywood’s biggest night, had won.

A large contingent of actors, producers, and directors representing La La Land took the stage to celebrate. They launched into their speeches before a chaotic scene unfolded in which it was revealed that the wrong envelope had been given and that the film Moonlight had actually won.

Price Waterhouse Cooper, the official accountant for the Oscars, issued an apology:

“We sincerely apologize to ‘Moonlight,’ ‘La La Land,’ Warren Beatty, Faye Dunaway, and Oscar viewers for the error that was made during the award announcement for Best Picture. The presenters had mistakenly been given the wrong category envelope and when discovered, was immediately corrected. We are currently investigating how this could have happened, and deeply regret that this occurred.” 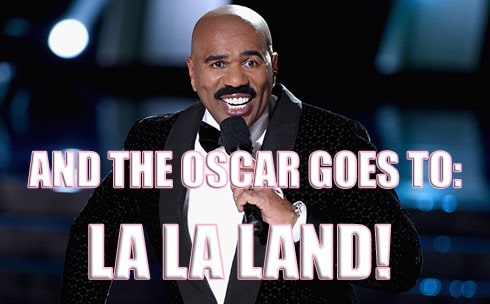 The massive mix-up reminded folks of Steve Harvey’s similar mistake in which he announced the wrong winner for the Miss Universe contest. Harvey acknowledged the connection with two classic tweets writing, “Good morning everybody! Went to sleep early last night. So… what I miss?” and “Call me Warren Beatty. I can help you get through this!”

VIDEO Check out the first released scene from Fifty Shades of Grey: Does it sizzle, or fizzle?