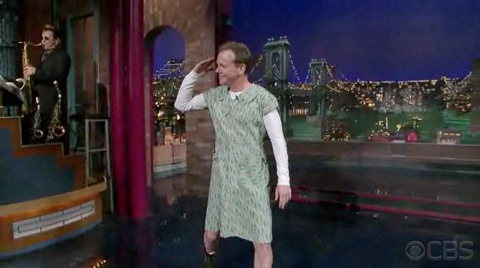 Find out why anti-terrorist tough guy Kiefer Sutherland wore a dress on The Late Show with David Letterman!

SPOILER ALERT! I’m about to tell you why, so if you wanted to find out by watching the video then stop reading now!

Kiefer explains to David Letterman that he was wearing a dress as a result of losing a bet. It seems the Kiet was a little overconfident in the greatness of the NFL’s New England Patriots and he told a “former” friend before their game with the Baltimore Ravens that if the Patriots lost he would wear a dress on Letterman. As you probably know, not only did the New England Patriots lose to the Baltimore Ravens, they got shellacked 33-14! So, there you have it. Yet another example of why gambling is a dangerous addiction. It can lead to bankruptcy and involuntary cross-dressing.

VIDEO Chely Wright’s coming out interview on ‘The Today Show’