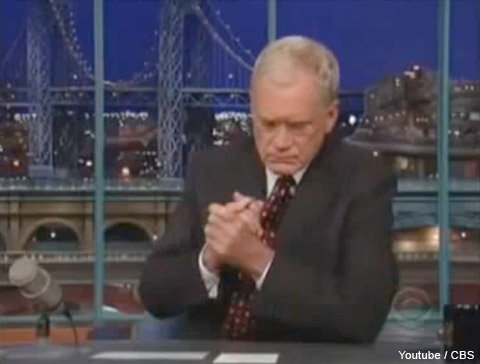 Here is a video of David Letterman admitting to having sexual relations with women staff members and the entire story leading up to it from last night’s stunning episode of The Late Show with David Letterman. Watching it is extremely awkward because you get the impression that the audience was never sure if he was serious until right at the end. Notice the laughter at inappropriate times.

(There is an annoying ad at the beginning and the video is compressed horizontally, but it’s the best I could find. Youtube is deleting these as quick as they show up, so I will try to stay on top of it and keep at least two working videos up.)

A shorter clip with better quality:


And here’s the complete transcription from the admission. Please, if you use this, give starcasm a little credit because it was a major pain typing it up!

(For more info about the case, see our other post!)

I’m glad you folks are here tonight and I’m glad you’re in such a pleasant mood because I have a little story that I would like to tell you and the home viewers as well. Do you feel like a story? (Crowd cheers)

This started three weeks ago yesterday. I get up early and I come to work early and I go out and I get into my car and in the backseat of my car is a package I don’t recognize and have never seen before and I don’t usually receive packages at six in the morning in the back of my car. (Laughter) I guess you can, I guess some some people do. (Laughter)

So I go through it and I study it and what this is is a guy is going to write a screenplay about me and that’s good news for anyone one, isn’t it really? (laughter and applause) And he’s going to take all of the terrible stuff that he knows about my life – and he seems to in this packet, there seems to be quite a lot of terrible stuff he knows about me – and he’s going to put it into a movie unless I give him some money.