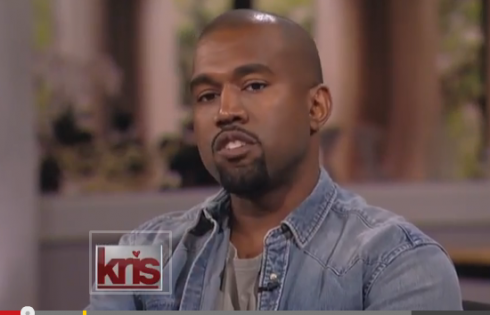 Kanye West stopped by Kris Jenner’s talk show this week to reveal how deeply he cares about girlfriend Kim Kardashian, and what she and their daughter mean to him. It’s emotional. It’s sweet, and it’s a very human moment.

“I could have people say, ‘This is going to damage your credibility as an artist or designer.’ And I say, you know, I don’t care, I love this woman,” Kanye said, addressing some of the criticisms he’s gotten for dating Kim. “My grandfather just passed. His whole thing was never about money, was never about popularity, his whole thing was joy, having joy in his life. [Kim is] my joy. She brought my new joy into the world. There’s no paparazzi,and there’s no blog comment, there’s nothing that’s gonna take that job from me. ”

Kanye’s never been a stranger to the paparazzi, but starting a relationship and having a baby with reality queen Kim Kardashian has probably caused a marked increase in the rapper being hounded by photographers. However, he says he doesn’t mind because “I love this person. She’s worth it to me.”

Kanye also credits Kim with helping save his life after his mother Donda died from complications from plastic surgery. “After I lost my mother, there were times… Well I put myself at risk,” he admits. “I felt like sometimes I didn’t have something to live for.”

The rumor is that baby North West’s first photo will debut on Kris‘ show Friday. According to reports, the image flashed very briefly to the studio audience, but not long enough for them to take a snap of it to leak. Kris Jenner would not confirm or deny that this happened, telling E! News “I don’t know, you’re going to have to watch the show.”

Kris didn’t miss the opportunity to gush about her grand-baby, though, saying that little Nori “is a beautiful baby. And I’m a little, you know, I’m her grandmother so I think she’s a beautiful combination of the two of them. It’s perfect. They’ve been having a really good time and Kim’s an amazing mom and enjoying motherhood and he’s the greatest dad in the world.” Kim and Kanye reportedly turned down a million dollar deals to sell North’s first photo to a magazine, and considered releasing the photo on social media.

Andy Samberg and Joanna Newsom are getting married