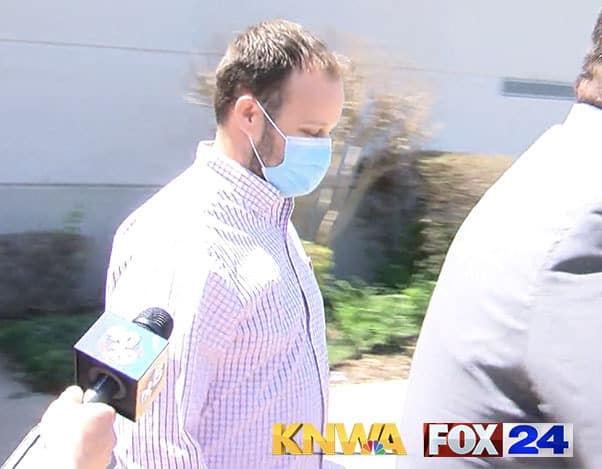 Former 19 Kids and Counting reality star Josh Duggar was granted bond after a court hearing on Wednesday. The 33-year-old former Executive Director of The Family Research Council Action was released from jail custody earlier this afternoon, and he will be residing in the home of third party custodians, who are friends of the Duggar family.

Federal Probation Officer Diem Nguyen recommended to the court that Josh should remain in custody. In addition to the potential flight risk, the officer pointed out that the husband and wife recommended as the third-party custodian offer piano lessons in their home, and there are sometimes minor children present.

Another concern expressed by the officer was the fact that the custodians have firearms in their home. Also, the husband works full time and the wife is often home alone.

The couple, who know the Duggars through church, stated that they were willing to make numerous concessions during Josh’s proposed stay with them.

For example, music lessons would be taught at another location and weapons would be removed.

This couple said they have a mother-in-law suite where Josh would stay through the duration of the trial. The couple, who know the Duggars from church, received a call from Jim Bob about being a third-party custodian, who briefly explained Josh’s situation.

The judge stressed to the couple that if Josh were to violate any conditions, that the first call would be to the parole officer and not to Jim Bob, or the church.

In addition to the custodians making concessions, there is a long list of requirements that Josh must adhere to while out on bond:

• Live with a third-party custodian

• Restricted to the home at all times except for court obligations, church, etc. Additional locations must be pre-approved by the probation officer.

• Report to the probation officer.

• No possession or viewing erotica at any time

• No possession of the internet and electronics. Not ask or obtain password(s) of the third-party custodian.

• Contact allowed with his children as long as his wife is present.

• Not possess control substances, no firearms, surrender passport, and not obtain one.

• The residence must not have minor children.

• If any conditions are violated an additional prison sentence of up to 10 years may be imposed.

As part of the four-hour Zoom hearing, investigators shared details about the allegations against Josh Duggar and the investigation that resulted in his arrest.

Little Rock police were alerted to someone downloading child pornography to a computer in Northwest Arkansas via a peer-to-peer file sharing network.

Homeland Security Investigations were able to track the suspected computer to Josh Duggar’s used car lot in Springdale. HSI received a federal search warrant for the property, which was served in November of 2019.

Josh was not told why the car lot was being investigated, but he specifically asked investigators if it was because child pornography had been downloaded to his computer. He also admitted to investigators that he had a TOR browser installed on his computer, which would give him access to the dark web and peer-to-peer networks.

Homeland Security Special Agent Gerald Faulkner said that investigators found a two-minute video on Josh’s computer that included two underage girls and a man engaging in sexual acts. There were also 65 photos of a girl “consistent with child pornography.”

More from The Sun:

The agent then said how he asked Josh about the images of minors 5 to 10 years old, he responded: “I’d rather not answer that question.”

The password of one of the programs used to obtain the images was the last four digits of Mr. Duggar’s birth year, the same password was used for Josh’s bank accounts, websites and more.

The agent mentioned how downloads from a specific file were made. The agent said the file “is in the top five worst I have ever had to examine,” as the specific file has been known to include children as young as 18 months old. The agent did not say if Josh downloaded the photos involving an 18 month old.

Some of those images and videos contained minors under the age of 12 and as young as a toddler. The child pornography was found in the office of Mr. Duggar’s business. A partition was downloaded, another hiding way to obtain the child pornography.

The lengths he went through to conceal his activity. He was doing it at his business, by a partition, that is supposed to alert his wife, Anna Duggar, if he is looking at things he’s not supposed to. He’s looking at the dark web.

[The special agent said] he’s been doing these cases for years and it’s the worst he’s ever seen. Those are the types of images and videos Josh Duggar was looking at.

The password was a password he used for years for his personal accounts. He is the person behind downloading the child pornography. He admitted he was familiar with programing and referenced the TOR browser.

We know the child pornography involves the sexual abuse of toddlers and young children. He has a history dating back 20 years that shows his sexual attraction to children and the deviousness of his activity.

Mr. Duggar is not a risk of flight. This case has been investigated for two years since May 2019. Homeland security executed a search warrant in November 2019. Mr. Duggar has not fled or left the jurisdiction. He voluntarily surrendered. When a defendant voluntarily surrenders, that’s a clear indication he is committed to these charges head on.
Josh’s team argued he should be with his pregnant wife and children

The court could impose restrictions. This is not a defendant who is going to flee. He is not a danger to the community. They could’ve arrested him at any point in the last two years.

Pickles and Hairspray on Josh Duggar arrest and release

The “Duggar Family News: Life is not all pickles and hairspray” Facebook page has been one of the most reliable sources for local information on the Duggars for close to a decade. They’ve been sharing updates on Josh’s recent arrest and bond hearing, including reports from local sources:

According to a source of mine who lives in the Duggars’ area, Anna is telling everyone to “keep praying” for the family. Josh has been telling people that “someone sent him the video and he had no idea what was on it until he opened it up.” Ummmm, okay. I wonder how many of his friends and family actually believe that.

Apparently Josh will be released tomorrow to live with the Reber family. He will be allowed to visit his children if his gullible wife is around to supervise. Seriously? Has CPS interviewed his children yet?

History is repeating itself. Jim Bob sets him up to live with family friends. Jim Bob hires an expensive lawyer. Jim Bob most likely paid whatever the bond was. Jim Bob could just say no, stay in jail until the trial, but instead he decides to again pamper his sick son straight to hell. Jim Bob holds a lot of the blame for his perverted son. A lot!

Josh Duggar’s trial is expected to begin in July. If found guilty of the two charges against him, Josh faces up to 40 years in prison and $500,000 in fines for both counts.

Jessa Seewald is pregnant with her second child