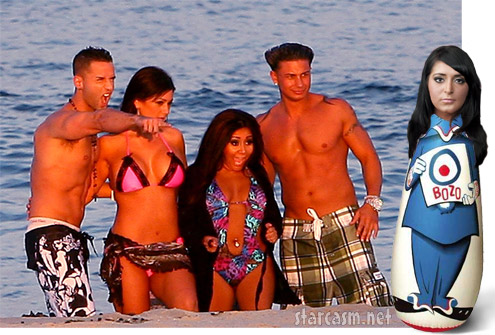 Jersey Shore is back for Season 2, and despite all the fame and money this show may have somehow gotten better!

One improvement is that the girls now have the money to purchase $395 crystal sunglasses at transvestite sex clothing shops. And, that’s exactly what Snooki did right before she went home, put them on, and went foraging for pickles in their kitchen. What Snooki didn’t know, and couldn’t see because of her glasses, was that The Situation had marinating chicken precariously positioning in the fridge. 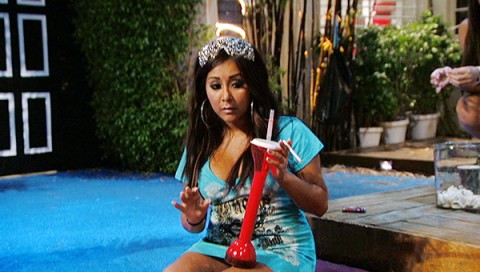 Before you could flex your abs the chicken was on the floor, it was a situation reminiscent of the scripted sitcoms of yore. The Sitch had to order take-out, which led to another great thing about Season 2: Watching The Situation order food under the name The Situation and spelling it out after the guy on the other end thinks he’s gettin’ pranked , “It’s S-I-T-U . . . ”

Fabulous thing #3: Ronnie being a client AND the president of IFF (I’m F*cked Foundation) for engaging in three-way makeouts with grenades while sh!tfaced and then crawling in bed with his (sort-of) ex-girlfriend Sammi.

But those were just sprinkles on the huge, multi-tiered Angelina Pivarnick hate cake we got served last night! This poor girl walked out on Season 1, missing her chance at worldwide fame and notoriety, but got a second chance when MTV invited her back for Season 2 in Miami.

Angelina was optimistic and full of bravado as she drove down from New York (alone) in Episode 1 and seemingly found friends among the people in the house who have had sex with her at some point (most of the guys), but once again she blew her chance at fame when she drunkenly started prying her claws into Pauly D’s personal business. She just kept on and kept on pushing, occasionally tossing in how much she loved Pauly and Michael, until both guys eventually had to turn and walk away.

Of course Angelina followed them outside to make sure she had completely sealed her fate and things escalated into screams of “Are you touching me?!?” and “It’s over. You’re all alone!” Angelina was left by herself to cry and ponder why her particular brand of shallow b!tchiness wasn’t suited for the show when all the other girls seemed to flourish with theirs.

Watch the full Season 2, Episode 2 “The Hangover” below (The clip will say 7:58 but that’s just the first part – it will continue playing through the entire episode)

As fame’s parting tribute to Ms. Pivarnick I offer up this poetic verse from Bob Dylan’s classic ballad “Farewell Angelina”

I tried to find Dylan’s original online to embed but had no luck, so here is the Joan Baez version as we all take a moment of quiet in honor of the second passing of the only girl on the planet too unpleasant for Jersey Shore…