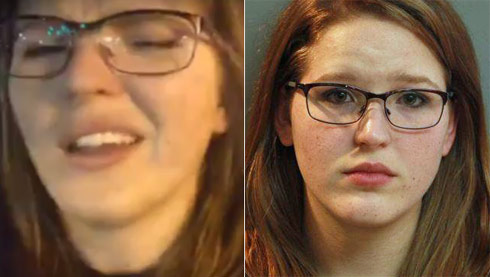 23-year-old Whitney Beall was arrested over the weekend in Lakeland, Florida after she used Twitter’s video feed app, Periscope, to live stream herself driving drunk.

According to a report via TSG, several 911 calls were made to alert the authorities. In addition, “Numerous text messages were sent to the driver asking her to stop driving before she killed someone or herself.”

Here’s the video Beall shared. At the 11:40 mark she can be seen striking a sign, which causes a tire to go flat (heads up–there’s lots of profanity):

“I’m driving,” Beall says. “I think I’m on a flat tire. This is horrible… Goodbye red light… This song is super hot, I want you guys to know.”

An officer accessed the feed by logging into his own personal Periscope account. Shortly thereafter, Beall was spotted driving her 2015 Toyota Corolla with a flat front-left tire. Beall struck a curb before eventually coming to a stop.

She failed a number of field sobriety tests and was arrested for drunk driving.