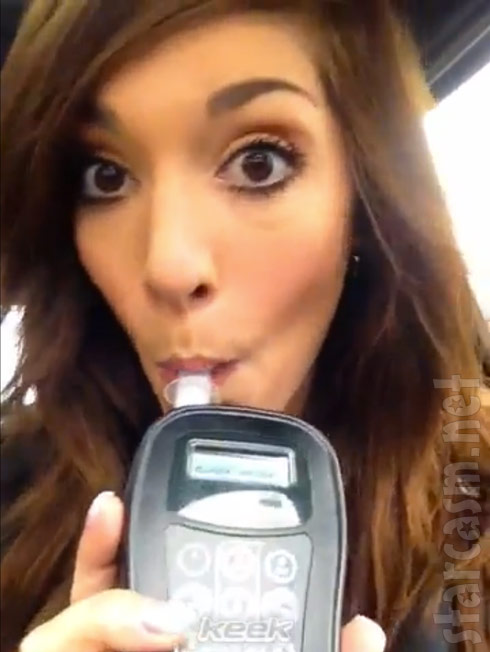 Former Teen Mom and future adult film star Farrah Abraham has been a perpetual publicity train wreck ever since her DUI arrest in Omaha last month after apparently partying a little too hard on St. Patrick’s Day. (How is it possible that was less than a month ago?!?) Since that time Farrah has seemingly been caught red, errr, handed trying to leak her own sex tape with a former boyfriend, and when that didn’t work, filming a new sex tape with adult film superstar James Deen — whose famous package is apparently nothing compared to what Farrah is used to. (Click here to watch the clip in which Farrah talks about that.)

But enough about James Deen’s package, this post is about something else that goes in Farrah’s mouth — a “vehicle ignition interlock device.” After her DUI arrest it was mandated by Nebraska law that Farrah install the breathalyzer type device on the ignition system of her car. I’ll let her explain how it works, including her claims that you have to blow in it while driving 60 mph, in her new Keek video, which she captioned with, “Blow this for 6 months:) YAY I’m a DD !” (I initially thought that might have been a clever reference to Farrah’s cup size, poking a little fun at her breast augmentation surgery, but I’ve since reconsidered.)

“Hey, so I figured I’d show you my partner in crime in the car,” Farrah says in the clip, “and it’s not Soph today, it’s this little thing — my ignition interlock device. Uck! So I’m going to be a professional at blowing.” (Sometimes blogging requires zero effort.)

“And, um, just so you know, when you have it, you gotta blow on it when you’re going 60 on the interstate, otherwise you’re going to get, like, a penalty against you. So rock on. DD for six months! Holler.”

Farrah has to keep blowing the device until September 29 when she regains her full driving privileges. Her next court appearance stemming from the DUI arrest is April 29.