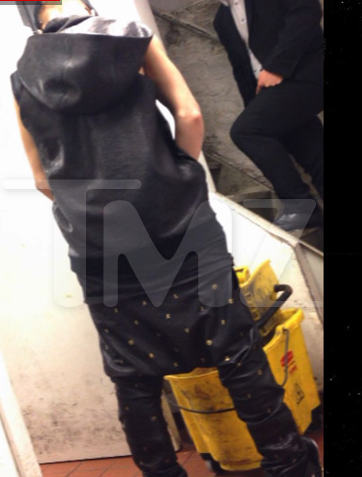 TMZ published a video from earlier this year of a possibly inebriated Justin Bieber pissing in a New york restaurant kitchen mop bucket instead of heading to the bathroom like everyone else in the world does when they have to pee.

Justin’s entourage laughs during the performance, one of them saying “We swagger man, this is just a walk to p!ss,” and “that’s the coolest spot to p!ss, you know you’ll always remember that.”

It’s not clear if the Biebs and his buddies were drunk, but they were leaving a nightclub, and it seems like they were.

At the end of the video Justin reveals his ire for a former president by spraying a photo of Bill Clinton with cleaning fluid and saying “F**k Bill Clinton.”

If the kitchen staff didn’t catch this, then some New York diners got to walk around in on the pop star’s pee the next day.