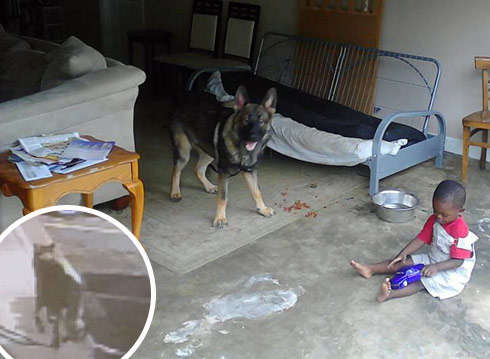 “The dog took the bullet for the kids so the kids would be safe,” a man who witnessed the shooting said.

A family of five was on their way to do some Black Friday shopping when they stopped at a Family Dollar store on Ralph David Abernathy Boulevard. In the parking lot, they got caught in the crossfire of an altercation and Noah, the family’s 2-year-old German Shepherd, was hit once in the neck.

Diondra Page said that Noah jumped out of the vehicle and began chasing the shooter, but the dog collapsed and died behind a building.

Here’s the report that features surveillance footage of Noah after he had been shot:

Noah’s owner, Kidon Martin, posted a bloodied photo of Noah’s lifeless body to Facebook and wrote, “noah sacrificed himself by pushing them away in the line of gunfire and took a bullet to the neck him being so relentless chased the assailant car to show his protective instict and collapsed in the pusuit he died from the lost of blood he will be mised i cant stop crying for he is his name noah a covenant of the arc which is my family.”

Atlanta Police Sergeant Gregory Lyon said, “They were fired upon and their family was terrorized. They survived that only to find that their pet is now gone. It’s sad for the whole family, especially the day after Thanksgiving.”