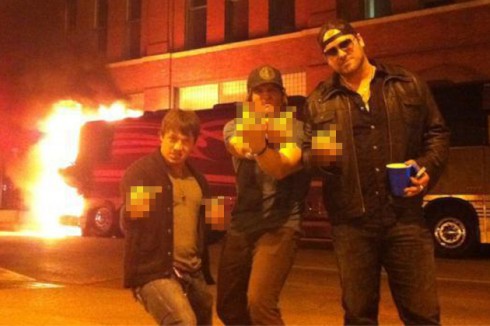 For a country act that is one of the most rock-n-roll tour photos I’ve ever seen! What you’re looking at there is Country crooner Jerrod Niemann’s tour bus on fire. In front you see Niemann, fellow singers Lee Brice and ( I first stated “some other guy” and was told by a fan it was Otto and then told it wasn’t by an Otto fan so I’ll stick with the “other guy” 🙂  ) giving the camera the old Johnny Cash one finger salute as the fire raged behind them.

The “Lover, Lover” singer performed at Heart Strings for Hope in Chattanooga, TN, a benefit for St. Jude Children’s Hospital, and was just wrapping up when the old grey dog broke out in flames around 10:45PM ET. In a bit of fire-irony Brice, who helped Niemann write his latest single “Shinin on Me,” had the same thing happen to his tour bus back in late January.

Our boys took it all in stride as is evidenced by the following video of the ring of fire that was made before firefighters arrived at the scene (Some adult language):

Just after 1:00AM, Jerrod posted to Twitter, “To be honest, thank the good Lord that @leebrice was here tonite or I’d be freddy Krueger.”

Niemann is scheduled for a show tonight in Davie, FL. Stay safe out there hoss and watch out for that heat!