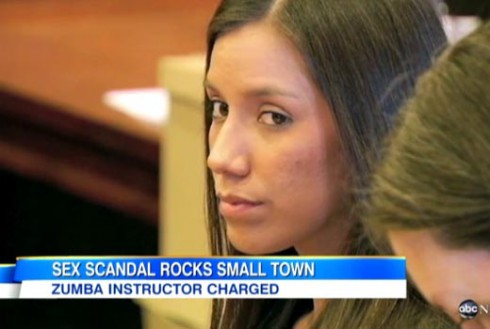 Tonight TLC airs a documentary called Sex, Lies, and Zumba about the Zumba prostitution scandal that rocked a Maine town. This May Alexis Wright was sentenced to 10 months in jail for running a prostitution business out of her Zumba fitness studio with partner Mark Strong. The story was discovered on Valentine’s Day 2012 when Kennebunk, Maine police found video footage and extremely detailed records inside Alexis’ studio. There was also evidence that Mark Strong was watching Alexis’ prostitution deals via live-streaming video.

The film, directed by Nick Angel, featured indepth interviews with Alexis’ husband, the local media, nearby business owners, Mark Strong’s lawyer Daniel Lilley and some of the people who were indicted in the case. Neither Alexis Wright (30) or Mark Strong (57) were interviewed for the documentary special, but it focuses heavily on their “curious and strange relationship,” according to the director.

When Alexis plead guilty to 13 prostitution charges this May, she argued in her defense that she was kidnapped sexually molested by her father when she was 8 or 9. She tearfully told the judge that she wants to work with abused women she gets out of jail. “It’s my intention to stand up for what is right,” she said. “When I’m out, I’m going to pursue helping people fight through situations that are similar to mine. I’m optimistic that something good will come out of this.”

Her lawyer Sarah Churchill argued that Alexis’ childhood trauma made her more vulnerable to manipulation, and prone to self-deception. “Because of her trauma history, it makes her more easily manipulated,” she said. “As this all unravels and charges are brought, you look back on it, like everybody does, you say to yourself, `What was I thinking? How did I fall into this?’ You just don’t see it while you’re in the middle of it.”

At that time the state district attorney maintained that they felt she was a “willing participant” in the prostitution industry despite her troubled past. “The state believes she and Mark Strong were equal partners and that she played an active role in the operation.”

Alexis’ husband Jason Trowbridge said in the documentary that he believed his wife when she told him she was working undercover for the state government to lure in and investigate sexual deviants. Part of her job, she told him, and he believed, involved taping racy videos of herself, sometimes in public, and posting them online under her own name. When she was caught, she continued her lie with her husband, telling him there was a mix-up between local and state governments. Because she continued with the sex work after charges were brought, her husband believed that she really was working with the government.

Who is Wendy Starland, and why does Lady Gaga want to silence her?