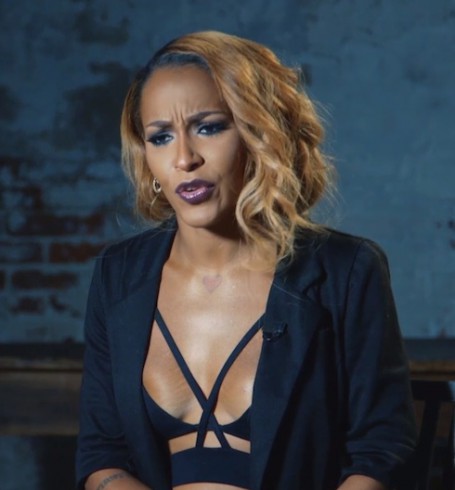 Amina Buddafly quits? Could this be the reality star’s last season on Love & Hip Hop? It’s been a rough week for Amina, in light of the revelation that co-star Tara Wallace is, in fact, still pregnant with Amina’s husband Peter Gunz’s baby. Amina aborted her own pregnancy with Gunz late last year, and is allegedly considering bringing her time before the cameras to an end.

VH1 just released a brand-new interview with Buddafly; it’s that video that’s gotten the “Amina Buddafly quits” rumor train going. In the confessional, the oft-frustrated wife of Peter Gunz seems rather in awe of all the drama that’s unfolded since she joined the Love & Hip Hop cast, and, perhaps more than anything else, suggests that she’s not sure she has anything left to offer:

Regarding her seemingly unending drama with Peter Gunz, Amina was straightforward: “It seems that every time you think it can’t get any worse, it just gets worse.”

As for the specific question of whether Amina Buddafly will quit Love & Hip Hop after the current season, the star couldn’t say for sure, but did admit that the thought has crossed her mind:

Actually, I have given thought to not returning for another season, just because of, you know…the emotional drain that is happening–or that has happened, and is happening again. I thought about, like, removing myself, and not doing it again, but, it’s like–we’ve already done it! We’ve already put everything out there, our whole dramatic lives. And it’s very rough, sometimes, but, I feel like everything’s already out there.

Amina concluded, “It’s just gone to an extreme, and it’s at a point where it’s, like, almost unbelievable, what’s going on between the three of us.”

Amina has mostly stayed away from the drama that followed “Fallout,” last week’s Love & Hip Hop episode, other than a brief two-tweet dispatch aimed at her critics she shared right after “Fallout” aired:

I married a man that acted like a single man. Which made me believe he was single. Call it stupid.

Plus if I'm married for citizenship then why am I still married????? Been had my papers

And, as far as Instagram goes, it’s largely been family photos for Mrs. Amina Pankey:

Lunch with my one and only ? #bk