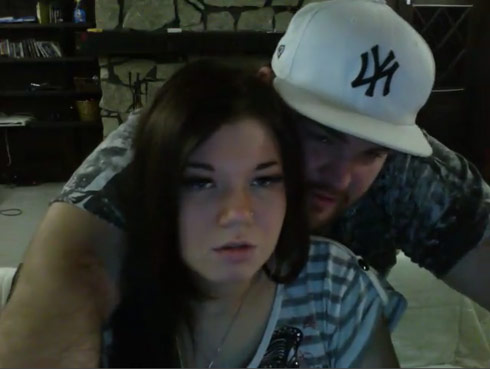 I literally have no idea what to make of this one folks. This video was posted on a relatively new Facebook account claiming to be Teen Mom‘s Gary Shirley and it features Gary along with his former fiancee Amber Portwood singing along to Youtube videos for the ’80s songs “Time After Time” by Cyndi Lauper and “Love Is A Battlefield” by Pat Benatar!

The title of the video is “Fun in the Sun” and it was posted with the caption, “times aren’t always bad…..see..go figure.”

I can’t be absolutely sure but it appears as though the video was made recently, which would mean it had to be after February 9th when a court lifted the no-contact order on Amber.

Something else I can’t be absolutely sure about – it appears as though Amber is either high or drunk and Gary is being very overly affectionate, seemingly smothering Amber from behind and even grabbing her breasts. (Amber responds by yelling, “Get off the tit!”)

Some highlights from the video include Gary declaring “We just gone done doin’ the big nasty,” and at one point he fakes punching Amber in the head a couple times, obviously making light of Amber’s multiple felony counts for assaulting him in the presence of their daughter Leah.

The seemingly appropriate “Love Is a Battlefield” dance-off occurs just after the 6:30 mark and suffers from a couple buffering issues, during one of which Gary serenades Amber a capella, letting her know she is the only one for him.

Gary flashes a pinky ring at one point and Amber makes sure to point out that she purchased it for him.

Just before signing off Gary says, “Tell everybody you love ’em Amber” to which she responds laughingly, “I hate you all.”

After Gary points out he will be posting the video on YouTube she says, “No, I love the people that are nice to me.”

Sooo, is Amber, who is possibly pregnant with someone else’s baby, back with Gary? Stop the madness!