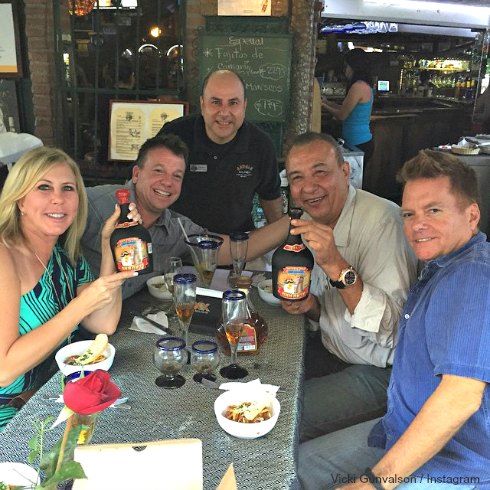 Vicki Gunvalson may soon be adding the title of “restaurateur” to her resume.

If you know anything about the RHOC, you know Vicki’s passion for whooping it up in Puerto Vallarta. Vicki and her family have been vacationing in Mexico for years and even own a condo there. During her visits south of the border, the 52-year-old always makes sure to stop by her favorite hot spot Andales.

Since the OCOG mentions Andales so frequently on The Real Housewives of Orange County, she began making flippant remarks about buying the restaurant. But, it looks like all that joking may soon become a reality.

Today, Vicki posted a picture saying, “Having a great meeting with Jorge, the owner of Andales. OMG I love this new drink aka “Vicki’s medicine”…#staytuned, #andales,#excitingnewsaboittohappen”

Does this mean Vicki is officially buying in? It wouldn’t be such a far fetched idea to combine two things she loves: Puerta Vallarta and owning her own business. Tequila shots anyone?