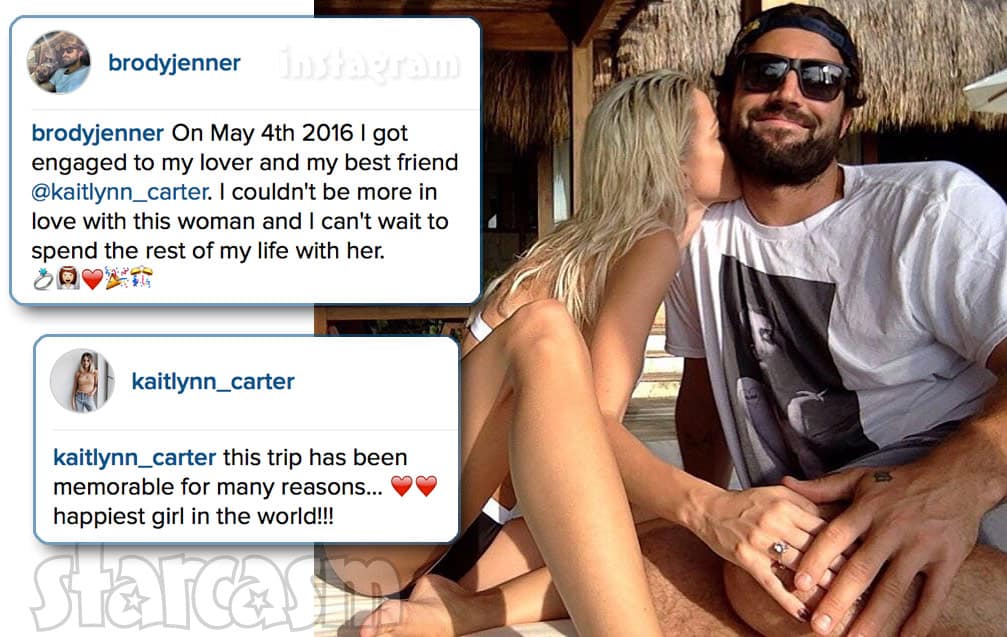 The Kardashian family continues to grow! On the same day that it was announced Rob Kardashian and Blac Chyna are expecting their first child together, Rob’s stepbrother Brody Jenner announced that he had proposed to girlfriend Kaitlynn Carter while vacationing on a tropical island in Indonesia.

“On May 4th 2016 I got engaged to my lover and my best friend @kaitlynn_carter,” Brody captioned the photo above. “I couldn’t be more in love with this woman and I can’t wait to spend the rest of my life with her,” he added, along with this string of engagement-themed emoji: ??❤️??

Kaitlynn shared a photo taken either just before or just after the one posted by Brody and wrote: “this trip has been memorable for many reasons… ❤️❤️ happiest girl in the world!!!” Here is Kaitlynn’s picture in which she is still kissing her bearded beau:

As I mentioned above, Brody and Kaitlynn were on vacation at the time of their proposal. Although the Kardashian family was thousands of miles away visiting another island (Cuba), Rob’s mother Linda Thompson was with her son and future daughter-in-law. She shared this next family photo and proudly boasted, “If we look happy it’s because we are! CONGRATULATIONS to @brodyjenner & @kaitlynn_carter who got ENGAGED in Nihiwatu! #Family #Love”

[In case you were curious, Nihiwatu is a luxury eco-friendly resort located on Sumba Island in eastern Indonesia.]

FIANCÉ ? headed out for another perfect day of surf here @nihiwatu ??

Brody and Kaitlynn have been together for more than two years after they first began dating in early 2014. Pretty much everyone is familiar with the groom to be, but what about the bride to be? Who is Brody Jenner’s fiancee Kaitlynn Carter? 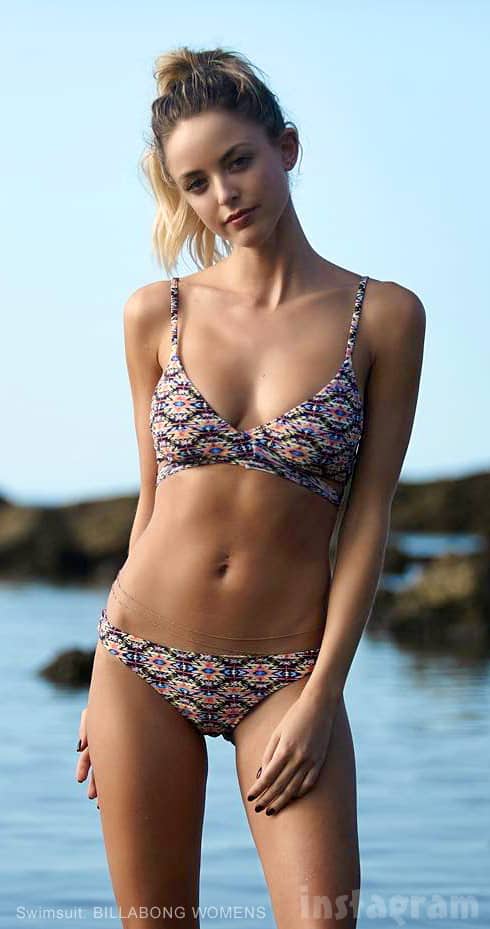 Kaitlynn is a 28-year-old model as well as a fashion and lifestyle blogger. She first garnered national attention as a Maxim Hometown Hottie finalist in 2010. At the time, Kaitlynn had already graduated from the University of New Hampshire and had relocated from her hometown of Portsmouth, NH to Boston.

Here is Kaitlynn Carter’s Maxim Hometown Hottie video in which she introduces herself before it cuts to at least 200 different quick shots of her in a variety of bikinis:

Kaitlynn continues to exercise her skills as a bikini model, but nowadays she does it as both a model and as a blogger. In addition to her own blog Western Wild, Kaitlynn is also the co-creator of The Foray Collective, which is described as “your online fashion destination to shop by influencer.” And, of course, one of those influencers is Kaitlynn.

Hey guys, I’m Kaitlynn! I was born and raised in southern New Hampshire, and have since lived in Florence, Italy; Palm Beach, Florida; London; and most recently, Los Angeles. I attended University of New Hampshire where I earned a B.A. in English before working in the financial services industry for several years. In addition to how much I LOVE to write, I also enjoy photography, cooking, travel, my dogs (2 Rottweilers and a Puggle!) and the beach (duh). If I’m not learning something new, I’m bored.. so I try to learn something new every day.. And while I’m certainly no expert, I love love studying and experimenting with fashion and design.

Was Scott Disick paid to go to luxury rehab facility in Costa Rica?