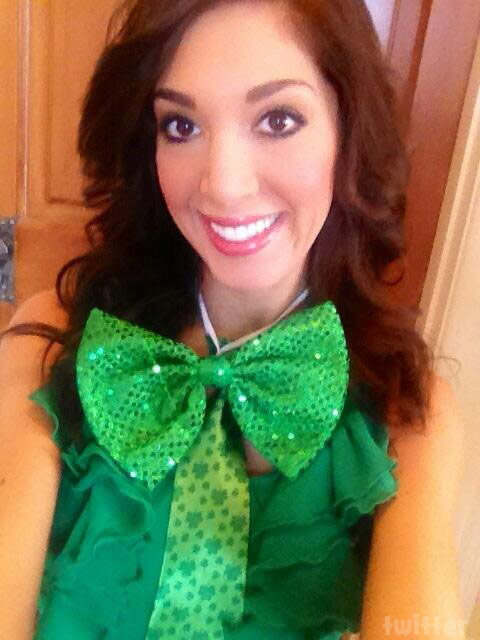 It has been one week since former Teen Mom star Farrah Abraham was arrested and charged with a DUI in Omaha, Nebraska after reportedly celebrating a little too hard on St. Patrick’s Day. Since that time there have been all sorts of conflicting reports about what actually happened, with the police report (included below in its entirety) saying Farrah nearly hit a police car while making a left turn and later that she was in the back of that very same police car “banging her head against the window” while “yelling and screaming” before being taken to the police station where she repeatedly bit the breathalyzer test prior to registering a BAC of .147 on an alternate device.

Farrah, on the other hand, says she had merely been “sipping on drinks to pass the time” while waiting on her sister and that she “could not give an accurate breathalyzer test, due to coughing and shortage of breath” because she was sick at the time. She also claims that she was retrieving the car to pick up her sister and take her home when she was confronted by police. “They insisted on the regular questions and asked me to get out of the car. I got out of the car, and because I was upset, I yelled.”

On the other other hand, a source for The Ashley’s Reality Roundup says she was there with Farrah that night and her story was completely bogus. “She can say what she wants, but the truth is that her sister Ashley and her friends were miles away by the time Farrah got arrested. A friend of Farrah’s offered to give her a ride home before they left, but Farrah didn’t take it.” (This account seems to be backed up by a photo that has surfaced of Farrah at the bar on St. Patrick’s Day holding two glasses of Guinness beer.)

All of this is amazing, albeit fairly predictable. What is amazing and completely not predictable, however, is that no one has managed to uncover Farrah Abraham’s mug shot photo yet! How is it we have somehow turned up the police report and still haven’t seen a mug shot photo?!? And I’m of the belief that if TMZ hasn’t even managed to turn one up one week later, it’s never going to happen. (Yes, that’s a challenge to all our sleuthing readers and members of the Omaha Police Department!)

So without a real Farrah Abraham mug shot, I was forced to satiate everyone’s appetite with the next best thing, courtesy of Photoshop.

So, without further ado, let me present to you the Top 4 Farrah Abraham Mug Shot Photo Guesstimates! 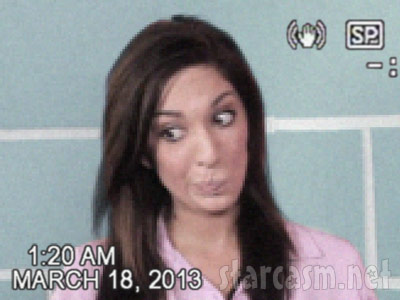 4. The “Whatever”
Even an extremely inebriated (allegedly ***cough cough***) Farrah Abraham knows that she’s too big a star to be worried about some silly Nebraska DUI arrest! (And for you those of you who spend too much time in the Teen Mom Universe — like me — you will notice a subtle homage to the Teen Mom/Teen Mom 2 mug shot capital of the world, Brunswick County, NC!) 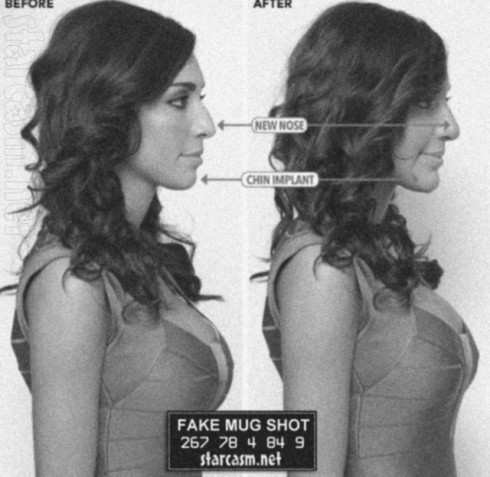 3. The Before And After
I realize this makes no practical sense, but it just seemed right visually. 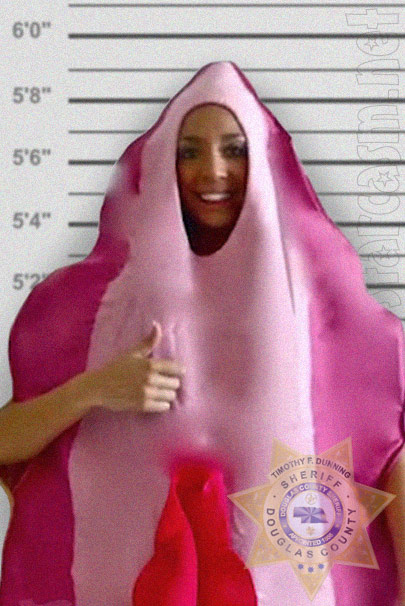 2. The Vagina Suit
Given how much the internet loves Farrah Abraham wackiness, I still do not understand how her dressing up in a vagina costume during a sex education video didn’t become a viral (heh heh) sensation. But, I still haven’t given up on that dream, and I continue to do my part to make it happen! Can I get a thumbs up Farrah Labiaham? 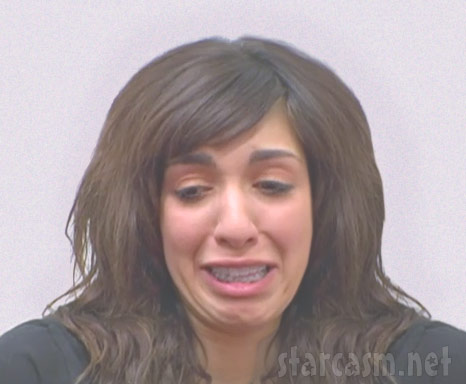 1. Farrah Crying
You all knew this was coming. Heck, you all probably knew that creating this image was the whole point of this post! (Well, in addition to further promoting Farragina.) The rest of the mug shots in this post were a whole lot of silly tom foolery, but I give this one about a 36% chance of being kind of accurate! (Another 29% would go to “Angry Farrah” and the remaining 35% would be just a normal mug shot.)

And for those diehard Farrah Abrahamologists out there, here are the details of Farrah’s arrest straight from the police report with only a few missing words due to legibility issues:

On MON 18 MAR 13 shortly before 0120 hrs reporting officer (R/O) KELLY, Matthew .. assisted Ofc. DOWNS, Joshua #1974 with an intoxicated driver at 11th and Howard. Upon arrival R/O was told by DOWNS that suspect, ABRAHAM, had careened around the corner of 11th & Howard while making a left hand turn and drove left of center nearly striking DOWNS’ cruiser. DOWNS made contact with ABRAHAM and noted signs of impairment (SEE DWI SUPP). R/O noted that ABRAHAM was in the back seat of DOWNS’ cruiser banging her head against the window while yelling and screaming. R/O made contact with her there. R/O opened the door and she continued screaming about not being able to find her sister. She got out of the cruiser and said she was going back to her vehicle. R/O informed her that she was under arrest but she would not cooperate so R/O forcibly handcuffed her. She then refused to get into R/O’s cruiser and was forcibly seated there. She was transported to Central Station where R/O read her implied consent. R/O attempted to give her a PBT .. but each time she put her teeth onto the tube and didn’t provide a sufficient sample. She was given a DataMaster .. by Crime Lab Tech RASZLER, Russ .. which tested .147 g of alcohol per 210 L of breath. She was cited and released. Her vehicle was towed.