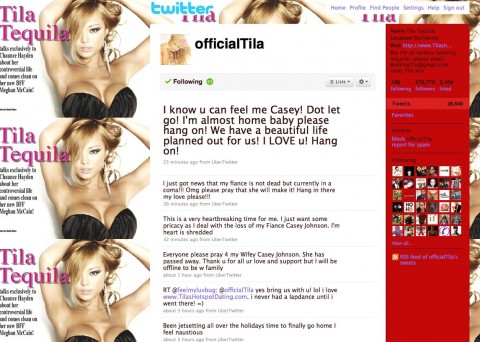 “Everyone please pray 4 my Wifey Casey Johnson. She has passed away. Thank u for all ur love and support but I will be offline to be w family.”

Thirty minutes later, the social media giant took to Twitter again after reports that she would be offline to claim that Casey Johnson was not dead, but in a coma:

“I just got news that my fiance is not dead but currently in a coma!!! Omg please pray that she will make it! Hang in there my love please!!! know u can feel me Casey! Dot let go! I’m almost home baby please hang on! We have a beautiful life planned out for us! I LOVE u! Hang on!”

LAPD has confirmed that a woman named Casey Johnson has died, and an officer told People that she was pronounced dead at the scene at 11:51a.m. Monday after police and firefighters were called to her house.

Officer Sara Faden told People, “It appears to be a natural death. There’s no evidence of foul play. A toxicology report from the coroner’s office will proceed next.”

Tila is known for being liberaln with the truth on Twitter, but why lie about something like this?

UPDATE: Tila has gone back to morning Casey Johnson on Twitter:

“I’m still in shock! Once again thank U for the outpour of love and support. I just wish to have some privacy at this heartbreaking time.

R.I.P my Angel. @caseyjonsonJnJ u will forever be in my heart! I love u so so much and we will Marry when I see U in Heaven my Wifey.”

UPDATE: Law enforcement told TMZ that Casey had been dead for several days.