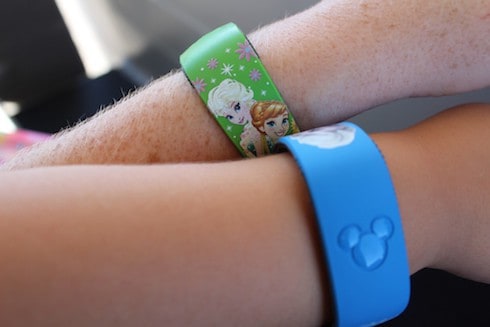 If you’ve been lucky (or cursed) enough to visit Disney World in the last few years, you know that the park takes your fingerprint before you can get through the front doors. Which can be an eyebrow-raising proposition under good circumstances–but the Disney World MagicBand tracking device the company began using in 2013 is supposed to be a silent and hyperefficient contraption of wonder, dedicated to, in Disney’s own words, making your visit “even more immersive and personalized.” Gizmodo’s recent piece on the technology is a bit more precise:

MagicBands are convenient as hell. You can schedule times to use your FastPass ride picks weeks ahead of visiting the park and then just show up and tap the bracelet on the Touch Point at the ride to skip the line. You can buy stuffed Mickey Mouse dolls, with a MagicBand tap and a PIN code. You can get your picture taken in front of Cinderella’s castle, and then tap your magical bracelet to send the photo to your MyMagic+ app.

And that sounds like something to make your trip easier–like a FitBit that can open doors for you while you run and get you a dinner reservation for when you finish–ultimately freeing you up to have more and better fun. But it turns out that the sinister thing about the band is the same thing that makes it so useful: the antennae inside are always “communicating with beacons hidden throughout the park to let Disney know what you’re doing and where you’re going.” And, while Disney goes out of its way to assure paying customers that all the information it collects is completely anonymous, the company also refused to talk with Gizmodo about “the more technical aspects of the MagicBand,” “how exactly [they protect] park goers’ privacy,” or the technology they use “to anonymize its visitors’ personal information.”

So the MagicBand comes off somewhat like an overhyped toy on Christmas morning: an incredible rush in the moment, but markedly less appealing when the adrenaline wears off and you find yourself dwelling on it. And that may be part of what Disney is banking on, because, while you don’t have to use the MagicBand or its related app at all to get around the park, according to the article, about half of the paying customers do–and the author himself didn’t even know that it’s not a required piece of technology until after he’d been.

Heck–the darn thing’s so helpful, even Tina Fey fell victim to its charms!

But of course it’s not just Fey. For almost a full calendar year, nearly every single non-character human being with visible wrists in Disney World’s official Instagram feed is shown wearing a MagicBand tracking device. (Except Mandy Moore, for some weird reason.) Even though Disney says it’s only using the data it collects to improve each individual park experience, technically, the company could either a) sell that information to outside advertisers or b) peruse that information to better advertise to you while you’re in the park as well as after you’ve left or c) both.

And it should come as no surprise that we don’t mind being surveilled, provided there’s an immediate and / or tasty benefit from the device enabling the surveillance. Your FitBit gets you feeling good about yourself. Your iPhone keeps you from ever having to fold a map again.

But both chambers of Congress just passed an absurdly named privacy act which will actually make it legal for internet service providers to sell your brower history to advertisers. So it seems the number of places and things you can do without being observed and kept track of by someone far away only requires Donald Trump’s curious signature to shrink significantly. And “It’s A Small World” is already almost impossible to get out of your head once it’s stuck there.

The Rock is Hollywood’s top money-maker of 2013