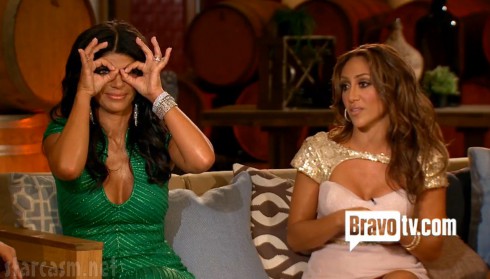 The Real Housewives of New Jersey Season 4 Reunion Special has gone pretty much as expected, with nonstop screaming, lots of accusations about husbands cheating, death threats, bad singing, and concern about “the children.” Melissa Gorga even went as far as to say the reason she and husband Joe Gorga are selling their home (including the custom recording studio built for Melissa) is because they don’t want their children attending the same school as Teresa and Joe Giudice’s kids!

Teresa took to her web site yesterday and addressed Melissa’s statement about not wanting their kids at the same school, as well as a number of other issues that have come up on the Reunion Special so far in a blog entry she titled “My Darling BEAUTIFUL Niece.” Included in the letter was a series of photos of Melissa’s daughter Antonia side-by-side with photos of Theresa as a little girl!

There were another million crazy hurtful untrue stories about me this week and I ignore them all, but one I can’t ignore. Again, Melissa is using our children in public, telling lies about them, to try and hurt me. Please Melissa, say whatever you want about me, but leave innocent children out of this!

I’m not even talking about her ridiculous claim that she’s leaving her “dream house” because she doesn’t want her kids to go to school with my kids. Our kids are all in school now and they don’t go to the same school already. She can stay in her dream house. We all know that’s not the issue…

But while I can protect my own kids from her lies and keep telling them that their uncle and aunt love them, I don’t have any access to my own niece and nephews anymore. Someday Antonia will be old enough to make her own decisions and hopefully I’ll have a relationship with her and her brothers then, but I have to answer the INSANE LIE that I ever, ever said anything mean about Antonia. Someday when Antonia is able to Google her own name, she’ll find the evil story her mother told to a magazine about me calling her “ugly” (I can only pray Melissa’s words were taken out of context by the magazine and I hope Melissa sets the record straight with Antonia privately, even though she didn’t publicly) but I want Antonia to also see my response: it’s absolutely NOT TRUE. I adore you Antonia, and I adore Gino and Joey. You are my blood. You are Gorgas. You are beautiful inside and out! Zia Teresa will always, ALWAYS love you and always be here for you with open arms. My children love you as well. They always treated you like their own sister growing up since you didn’t have any. I hope one day you’ll be able to hang out again.

And Antonia, don’t ever, ever let anyone tell you you are anything but BEAUTIFUL! Know how I know? Know how everyone knows this horrible story about me calling you “ugly” isn’t true? Because you look just like me when I was a kid! To be honest, you look almost more like me than my own daughters. You are like a daughter to me and will always be in my heart. I love you Antonia! xx

Believe me, I hate to leave a message for my nieces and nephews on the Internet, but I have no other way to get through to them, and at least this will be here, permanently, for them to read with their own eyes someday. I meant every word of it. I don’t care who believes me or doesn’t, this is how I feel.

And this wasn’t just a tiny rumor, the accusation was in a national cover story (http://realhousewiveslives.wordpress.com/2012/10/04/melissa-gorga-claims-teresa-called-antonia-ugly/) and you and I both know Melissa bought boxes of that magazine, so yes, Antonia will one day see it. I wasn’t trying to make this about me–I was only trying to point out that it’s ridiculous to claim I called Antonia “ugly” when we look alike–that would be like calling myself ugly. She’s beautiful, I love her and my nephews. Visit us all in 15 years and hopefully you will find one big happy family. xx

I know I’ll laugh about this cover story one day. Actually, the red dresses did make me laugh right away: 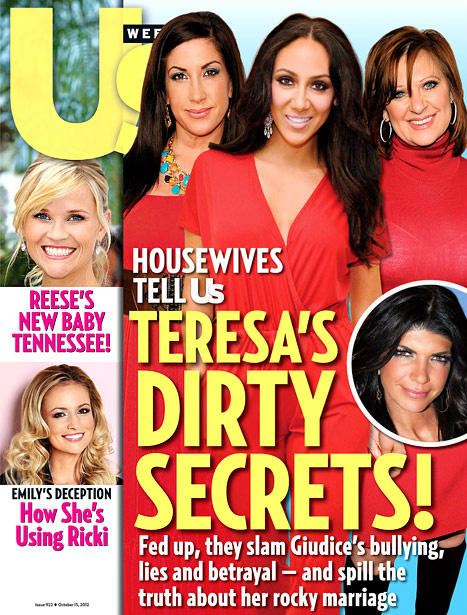 UPDATE – Melissa Gorga responded to the blog entry on Twitter, writing “Did T seriously write a whole lying blog about my daughter? This is why I’m moving. Always about her. #enoughalready”

VIDEO Danielle Staub reacts to Teresa Giudice sentencing: “I love you girl. You got this.”