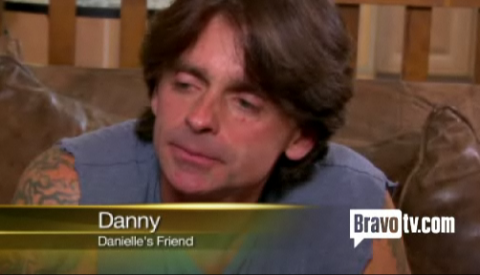 On Bravo’s Real Housewives of New Jersey, there have been jokes about the Manzos, Lauritos, and Giudices potentially having mafia connections because of things like the “let me tell you somethin’ about my family: we are as thick as thieves” comment, and the crazy level of conspicuous consumption, but it turns out the one with the real mafia connection is Danielle Staub.

Tonight on the show she meets with a friend of an acquaintance, Danny Provenzano, a man with a colorful background. She sees Danny, whose late uncle is rumored to have helped off Jimmy Hoffa, to ask him for protection and mentoring when dealing with the Manzo-clan.

Provenzano himself isn’t new to crime firsthand, or show business. June 2009 he was released after serving a four-year sentence for racketeering. (CLICK HERE to see Danny’s mug shot and see his criminal record.) Right before he got locked away the movie he wrote and directed, This Thing Of Ours, premiered.

His appearance on Jimmy Kimmel Live to promote the film (which features James Cann in it) was used against him in court.

In upcoming episodes Danielle brings Danny with her to a function the other Wives are attention. When it turns out they’ve made sure to deny Danielle a table, Danny utilizes his buddies (including a State Senator) to secure her a seat. One of the housewives reportedly says (probably Caroline) “Danny Provenzano doesn’t hang with bad company. Danny Provenzano is bad company.”

Mr Provenzano isn’t being coy about why he wants to be on the show: he’s trying to use it as leverage to get back in the show business game. He probably also has a romantic subplot with Danielle. He takes his million-dollar baby boxing, and she works the stripper pole for him.

Tomorrow Danielle Staub’s book comes out! The Naked Truth tells Danielle/Beverly’s story from her own point of view.

Caroline Manzo says if her husband cheated on her, she’d forgive him