Insider info is leaking out from the highly anticipated filming of the Teen Mom OG reunion show.

Amber Portwood, Catelynn Lowell, Farrah Abraham, and Maci Bookout were in New York City over the weekend to catch fans up on where they’re at currently and to give their thoughts on the most recent season of the show.

E!, which has been consistently plugged into reliable “insider” TM sources as of late, reports that Amber was NOT wearing her engagement ring, but she affirmed that she and Matt Baier are still a thing. Their source also stated that Portwood still had praise for Matt and that she believed they would be “back on track” soon.

Modern Topics went into a little more detail, as their source stated that Amber, sans Matt–because he’s having “surgery” before his schedule book signing on Tuesday–was asked by a fan if she still had cold feet…and she replied, “I’m not getting married anymore.”

There was also a preview of an as-yet-unaired aired scene in which Amber had to ask Matt for her own driver’s license. MT’s source said that “Amber said it initially started because she lost it once, so he started holding onto it. Nessa asked if he still has it, and she said no, that she stopped that months ago because she needs to be independent and Matt saw it as controlling her.” 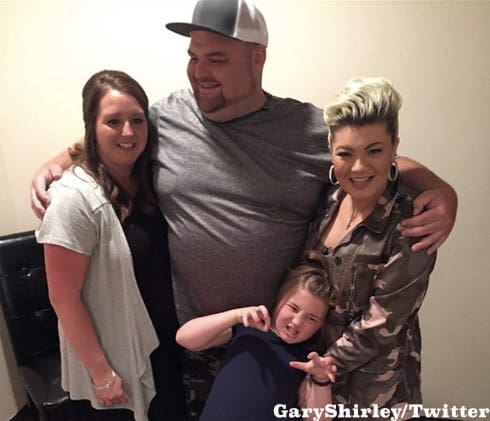 Other alleged deets from Amber’s segment via MT:

–> She kicked Matt out of the house before her NYC trip but she said she’s let him back in.
–> Amber thinks that Matt is a “pathological liar.”
–> Maci and Catelynn find Matt to be untrustworthy. Catelynn revealed that she’d already told Amber as much in person.

Speaking of Catelynn and Amber, check out this singing session by Portwood from the NYC trip!

Maci Bookout and Mackenzie Standifer addressed Ryan Edwards’ admittance to rehab. E!’s source said, “There was back and forth between Maci and Mackenzie, but no yelling or anything like that. They talked about Ryan and his drug issues. Ryan is in rehab and has been in there about two weeks. They also said he’s doing well.”

M and M said they were involved in motivating Ryan to seek help, but in the end the decision was his and his alone. MTV also reportedly showed a clip of Ryan headed to rehab. Both Mackenzie and Maci have spoken with him since he entered.

Abraham had to be filmed separately because of “Swiper no swiping” obviously, but some nuggets were dispensed even without any mom-on-mom beatdowns…

According to E!, Farrah walked out at one point, due to aggravation from questions by Dr. Drew. She was consoled on stage by father Michael, who said he believes that his famous daughter needs therapy.

MTV reported on another clip, this one of Farrah with mom Debra, who was “diagnosed” with Asperger’s by her daughter, and her fiance Dr. David in a Florida hotel room together. Dr. David claimed that Farrah physically assaulted him during that vacation, but Abraham chalked the allegation up to “negativity.”

Catelynn came out with a new pink hairdo…seriously, that’s all that’s come from Camp Baltierra’s segment so far.