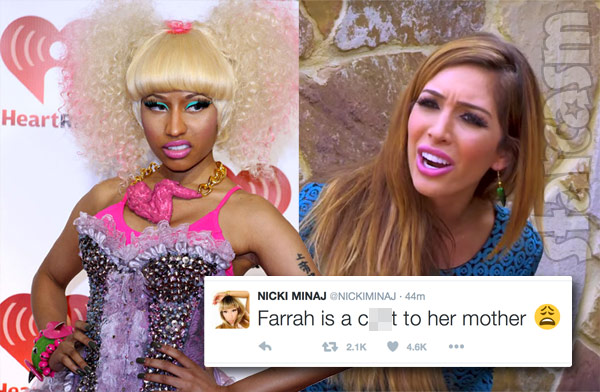 We can add Nicki Minaj to the long list of huge celebrities who are fans of Teen Mom! The rapper took a little time out of her busy schedule for some Sunday afternoon MTV and chill earlier today, and she couldn’t resist taking to Twitter to share her reaction to the show’s most divisive star, Farrah Abraham.

One fan responded by tweeting, “even her own daughter had to slap her,” adding a ? emoji.

Nicki retweeted that response and added:

Although Farrah wasn’t tagged in the tweets, she must have been made aware of Nicki’s comments, because she took to Twitter to respond:

Things are erupting as I write this, so I will just step out of the way and let the ladies fight their own battles via screen caps: 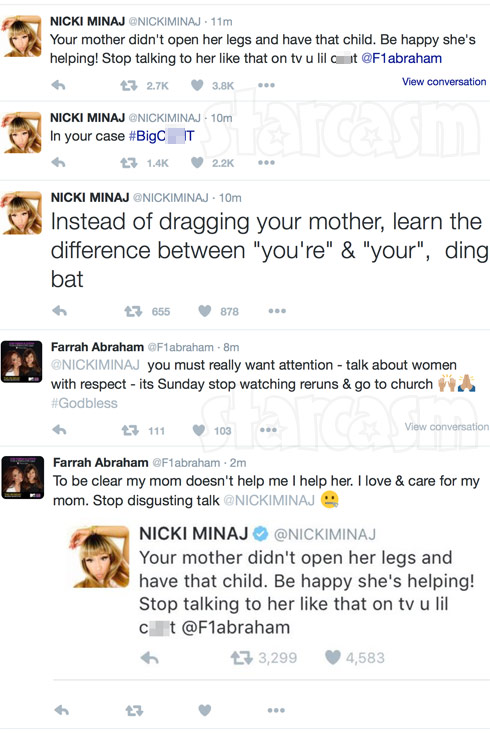 We will continue to update if the feud escalates. (There’s no way Nicki won’t respond to the church comment, right?!)

UPDATE – Farrah is the first to add more:

I slay I have no time for rerun watching ignorant minions like @NICKIMINAJ worry about your family #Watchandlearn pic.twitter.com/DeoH6CBPQw

Farrah has since spoken with TMZ and informed the site (and the rest of the world) that her daughter Sophia is no longer allowed to listen to or watch Nicki Minaj’s music videos because “they already have little girls asking for butt injections and wanting to color their hair crazy.” Farrah says of Nicki, “She’s dead to me…that mess,” adding that Nicki needs to focus on her “rapist brother.”