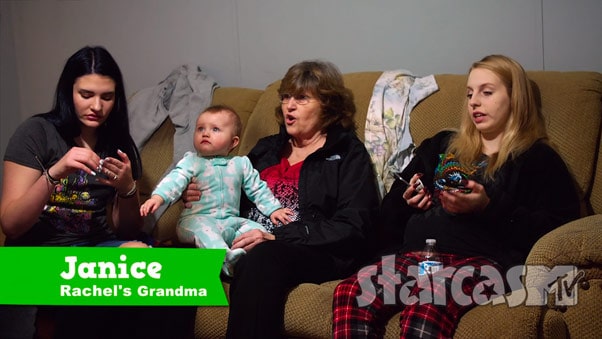 We previously reported that Teen Mom: Young and Pregnant star Malorie Beaver was arrested Saturday night for domestic assault, but it was unclear at the time who she allegedly assaulted. We now have the police report from the incident which reveals that Malorie caught the charge after reportedly putting her hands on her grandmother!

According to the arrest report obtained by The U.S. Sun, police responded to a call Saturday night at approximately 11:13 PM. The call was made by Malorie’s grandma Janice Bollen, with whom Malorie had been staying.

When police showed up, Janice told the officer that Malorie had “just arrived home and was intoxicated.” (Fans of Teen Mom: Young and Pregnant will know that Malorie’s story line on the show centers around her choosing a party lifestyle over being a mother to her daughter.)

Janice said that Malorie “went into the bathroom and fell into the door waking up her child causing her to cry.” Janice picked up Malorie’s infant daughter Emerson in an attempt to comfort her, but Malorie insisted on taking the child. Janice “reluctantly” conceded, despite concerns about Malorie falling.

Malorie then took Emerson into the bedroom where the child continued to cry. Malorie eventually returned the little girl to Janice in the living room. More from the report:

[Janice] advised [Rachel] began being loud and it scared the child so she wanted to sit in her lap which hurt Ms. Beaver’s feelings. She advised Ms. Beaver began saying bad things about her and then grabbed her arm in an aggressive manor twice. Ms. Bollen stated she advised Ms. Beaver not to grab her again or she would contact police and Ms. Beaver told her to go ahead and continued to be verbally aggressive toward her.

The officer on the scene states in the report that Malorie did “appear to be intoxicated due to her being unsteady on her feet and having slurred speech.” It states that she was also “uncooperative” when asked about the incident.

Malorie was eventually arrested and taken to the Monroe County Sheriffs Office without incident. She was charged with domestic assault and was released the following day after posting $1,000 bond. (One online source also lists a charge of public intoxication, but it doesn’t appear that Malorie was officially charged with that.)

Prior to the police report surfacing, a friend of Malorie’s mother Stephanie Bollen reached out to @TeenMomShadeRoom on Instagram to explain what happened. “She got arrested for coming home drunk and hitting her nana and had to have her mother bond her out and she is currently sleeping it off at her mother’s house,” the source claimed, emphasizing that Stephanie is “the same mother she was just downing.”

“I DIDN’T FU**ING HIT MY NANA,” Malorie replied in the comments. “GO WATCH THE LIVE AND YOU’LL HEAR THE WHOLE STORY,” she added. (More on the live in a minute.)

Malorie posted a video responding to the arrest, as well as the person that spoke with Teen Mom Shade Room. Here’s a transcript of what Malorie had to say. (Full video embedded below.)

I did not hit my nana. The b*tch who was going around saying I hit my nana is some snaky ass motherfu**in’ b*tch who is “friends” with mom, but likes to talk sh*t, and has been talking sh*t since day one. I do not like her. I have never fu**ing liked her. And she knows who she is!

So, first off, that’s incorrect. And everybody will know it’s incorrect as soon as the fu**ing court date happens because all my charges are getting dropped. Literally, all I did was grab my nana’s wrist [and] moved her hand so I could get Emerson. The only reason they arrested me for domestic assault is because they didn’t want to arrest me for a p.i. [public intoxication] because I was at home, so you can’t even really arrest me for that. They just wanted me out of the house, basically.

So, really, they couldn’t even arrest me for domestic assault, but they did anyway.

A portion of the live stream that Malorie mentioned was resposted by @TMMamaDrama and features Rachel explaining what really happened:

Nana was intoxicated. So they wanted to get Emerson from Nana because Nana was, like, ‘No, this is my child! This isn’t your child!”

And so then she barely even grabbed — she did this to nana [Rachel grabs the wrist of Malorie’s smoking arm]. She literally grabbed her wrist like this and picked it up to try to get Emerson and Nana was, like, “I’m gonna call the cops!”

And so then she walked into the other room, right? And all of a sudden the cops show up, and Malorie’s, like, “Oh sh*t!” And then they arrested her.

Rachel says that she later spoke with her grandmother Janice. “I went by nana’s and she was, like, ‘this is all a big misunderstanding. I wish that I would have never done that. I was drunk. I wish I had never put Malorie in jail.'”

Here are the actual videos. (WARNING: As you can tell from the transcripts above, they do include some foul language.)

Mallori says all this is a big misunderstanding

#Watch: Apparently Mallorie and Nana were both intoxicated. They are saying it was a misunderstanding. Thoughts? #youngandpregnant

You can keep up with the Beaver family’s multi-generational cycle of addiction and abuse with new episodes of Teen Mom: Young and Pregnant airing Tuesday nights at 9/8c on MTV. Or you can just follow Rachel, Malorie and Stephanie on Instagram to watch the drama unfold in real time. If you don’t want to freebase their drama, I recommend you follow @TMMamaDrama and @TeenMomShadeRoom to get curated recaps and commentary with just a slight delay.