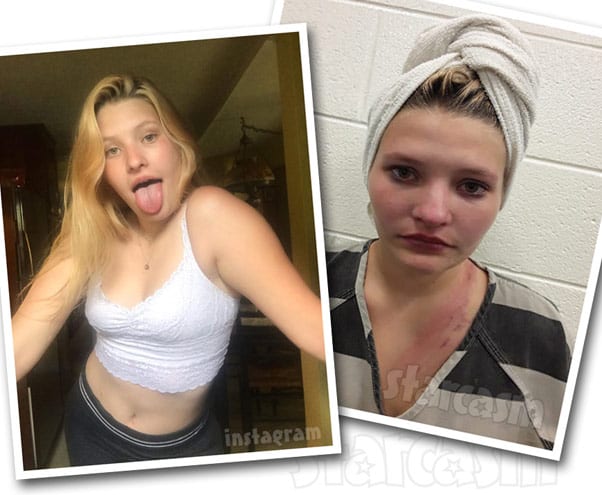 The Sun reports that Malorie entered the guilty plea on Tuesday and received 11 months and 29 days of probation. In addition to probation, Malorie was also ordered to pay a $250 fine. As a result of the plea, her other charge of underage drinking was dismissed.

We were the first to report on Malorie’s arrest on Monday, and at the time there weren’t many details available. There were rumors online that she had been involved in an accident, which seemed to be backed up by the visible seat belt injuries on Malorie’s neck and shoulder visible in her mug shot photo.

The Sun later obtained a copy of the police report and confirmed that Malorie was in an accident. Thankfully, no one else was involved as Malorie’s accident was the result of crashing her vehicle into a tree.

A police officer arrived on the scene of the crash and states that he spoke with Malorie and “observed a strong smell of an intoxicant about her person, her pupils were dilated, and she was unsteady on her feet.”

The officer adds: “I also noticed that her speech was slurred and she had trouble understanding and answering simple questions.” The officer also observed broken Bud Light Lime bottles in the floor board of the passenger side of the vehicle.

The report states that Malorie first told the officer that she had not had any alcohol, but she later admitted to having “a couple” beers. The officer requested that Malorie take a field sobriety test, but she refused.

Due to obvious observable impairment, Malorie was charged with driving while intoxicated. Due to not being 21, she was also charged with underage drinking.

Malorie’s mother Stephanie has responded to Malorie’s arrest on social media. “She’s beating herself up right now and feels horrible…she’s in so much pain and very, very upset with herself,” Stephanie wrote on Instagram, as reported by The Ashley.

“Nobody wants to get a call at 4 a.m. in the morning that their child was driving drunk and dead in a car accident,” Stephanie wrote. “I’m glad I wasn’t the mother who went through that it’s a horrible situation all the way around and I understand she caused it herself.”

Stephanie emphasized that Malorie has been trying to straighten her life up recently. “Mal has been doing a wonderful job [she’s] been working all the time she’s been taking care of her kid everyday and the one night she decided to go out this happened…I’m not trying to make excuses for her but I’m also not trying to beat her up as she’s beating herself up right now.” She added: “Everybody makes mistakes and she will learn from this mistake.”

Stephanie also shared this lengthy Facebook post on Tuesday about the struggles of loving someone with addiction issues:

Loving a drug addict or an active alcoholic is the hardest thing you will ever do. Watching someone you love, that has fought so hard to beat addiction, throw everything away and sink back into a life that will most likely lead to jail or death, is one of the hardest things you will ever do. All you wanted was to help them back to a clean and sober life but you realize by doing this, as you have so many times before, will now just be enabling them because it will show them that you will always be there to bail them out. You want to grab and shake them and say “What are you doing?!?!” But, at some point you realize that it wouldn’t make a difference. So you sit back and watch the tragedy unfold, as if you are watching a movie. Feeling helpless to stop it, feeling like you haven’t done enough to help, even though you know only the addict can help themselves.

Battling a drug and/or an alcohol addiction is a beast for the person addicted and the ones who love them. So l am asking you to stand with me in prayer for every family member and friend who has lost or is losing their battle with drugs and alcohol and those who continue to conquer it! Put this on your page for one hour if you know someone who has or had an addiction. Many will be hesitant to copy and paste this. Some of you won’t paste this but I think I know the ones who will. And thanks in advance. 💚

The DWI arrest was Malorie’s second arrest this year. She was booked for domestic assault in early February after an altercation with her grandmother Janice Bollen. According to Janice’s account in the police report, the altercation took place after Malorie arrived home inebriated at approximately 11:13 PM.

The DWI crash also wasn’t the first time this year that Malorie has sustained visible injuries after being out partying. Back in April, Malorie’s face got scuffed up pretty severely during a night out with friends. Despite reports that she had been involved in a fight, Malorie insisted that she had just fallen down. Here are before-and-after photos: 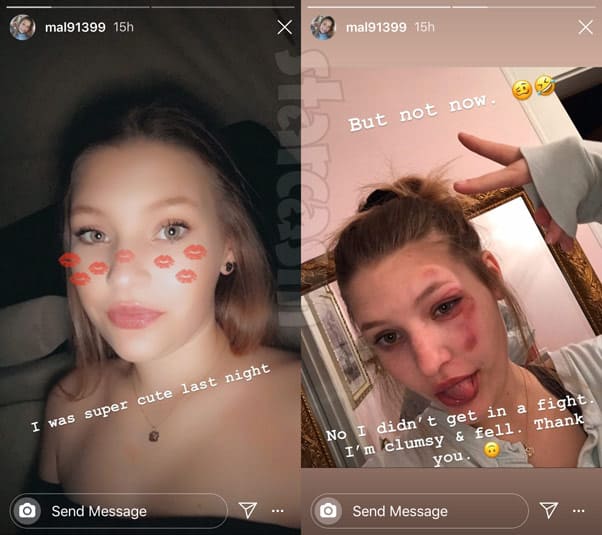 Soon after Malorie’s face was injured while out partying, she posted that she was “quarantining away” from her 21-month-old daughter Emerson at the time. Malorie revealed the mother/daughter distancing after being asked why she wasn’t posting any photos with Emerson on social media. “Corona obviously you dumbasses,” Malorie wrote. “I went out & have been quarantining away from her.”

Malorie had better get her life under control or else she will soon be prisoning away from her daughter — AND all of her party pals.

#TeenMom #YoungAndPregnant Malorie Beaver says her mom Stephanie reported her to DCS twice and wants custody of Malorie's daughter Emerson. It's quite the turnaround 3 weeks after Malorie was "quarantining away" from Emerson & Stephanie couldn't find her. https://t.co/k4seQCPSmv pic.twitter.com/CKIUbAeEYi

It has been reported that Teen Mom: Young and Pregnant will probably not be back for another season, but MTV has yet to confirm that the show has been cancelled.

TEEN MOM Did Ashley Jones and Bariki Smith break up?