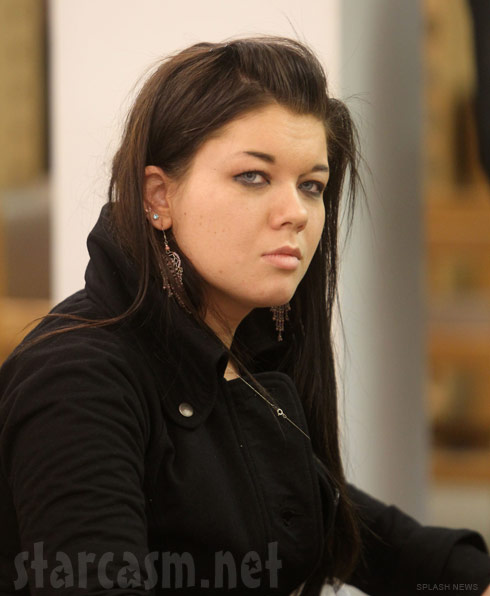 Earlier this week we reported that Teen Mom star Amber Portwood was rushed to the hospital Wednesday after suffering a severe panic attack, and now the troubled Indiana mom is speaking out, revealing that she is still depressed and suicidal.

The startling news comes less than two months after Amber checked out of a Malibu, California rehab clinic seeking treatment for depression and her anger management issues, a stint that apparently didn’t help very much.

“Honestly, I feel like I did two months ago. I’m still suicidal,” Amber revealed to E! News Friday. “I’m f–king depressed. My family’s not together.”

Amber tells E! she is most upset about the “lies” being reported by the media, like the cover story in this week’s issue of the tabloid Life & Style claiming Amber has been spending a lot of time out clubbing and drinking, and not much time with her daughter Leah. (You can read about the story in our post on Amber’s panic attack.) The story is extra painful because they talked with Amber’s brother, Shawn Portwood, who told the magazine, “I don’t even know if Amber wants full custody of Leah.” He goes on to explain, “She enjoys her freedom too much right now.”

“What hurts me the most is when people believe the lies about me,” Amber tells E! News. “The bullying is too much to handle. Look at the rate of teen deaths related to bullying. It’s scary.”

And as far as the drinking issue, Amber points out that her stint in rehab was not for substance abuse. “I went to rehab for depression and anger management, not drug or alcohol abuse,” she says. “I have been out twice since I left rehab and I’m 21. I take my medication the way I’m supposed to.”

She also addresses the claim that she doesn’t want custody of Leah by stating, “The only reason I am letting Gary have custody of Leah right now is to keep CPS off our backs.” If you recall, Amber is still on probation after her plea deal from the felony domestic battery charges stemming from her numerous attacks on Leah’s father Gary Shirley. “I see Leah whenever I can. I have stipulations as to when I can and can’t see her.”

Amber does have one positive thing to report, she and her mother are doing much better. “My mom knows everything that’s going on in my life right now and we’re great,” she tells E! News.

If it really is the false headlines and the media attention that is preventing Amber’s recovery from depression, then I believe MTV needs to seriously consider removing her from the show. I was not one of those who thought Bravo was to blame for Russell Armstrong’s suicide after his appearances on The Real Housewives of Beverly Hills turned the spotlight on him and his dubious past, but this is a completely different situation. I want to follow Amber’s story as much as any fan of the show, but if it’s putting her mental health and life at risk, then they have to take her off!

What do you think? If the attention garnered from being on the show really is keeping Amber depressed and suicidal, are they obligated to remover her? Take the poll!