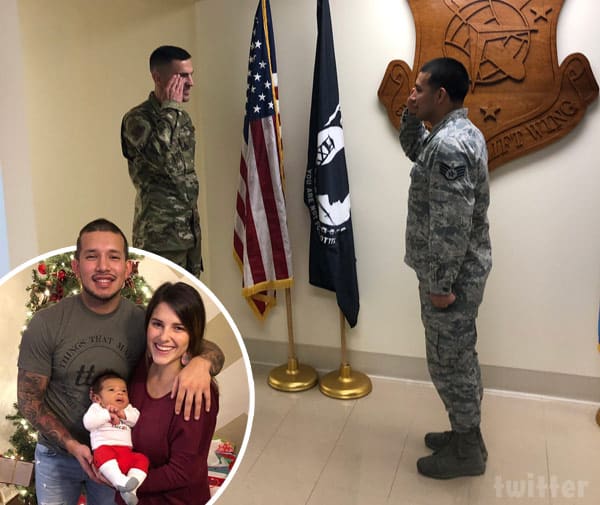 It’s been an amazing few months for Teen Mom 2 dad Javi Marroquin! The 26-year-old reality star welcomed son Eli with girlfriend Lauren Comeau on November 15, and he opened his CrossFit Killshot gym in Smyrna, Delaware just a few days ago. In addition to those major life events, Javi revealed earlier today that he has reenlisted in the U.S. Air Force Reserves with a six-year commitment!

“Here’s to another 6,” Javi captioned the saluting photo above, adding an American flag emoji. There was some confusion after Javi’s post as many folks expressed concerns about Javi leaving his newborn son, girlfriend, and brand new business behind. “I finished out my six-year contract and instead of walking away I transitioned to the reserves,” Javi explained.

In case you are still confused, opposed to Javi’s initial enlistment, being in the Reserves doesn’t require nearly as much of a time commitment. According to Wikipedia, “most Air Force Reservists are part-time Traditional Reservists (TR) who serve in the Unit Program, in which they are required to report for duty with their parent Air Force Reserve Command unit, typically a wing, group or squadron, at least one weekend a month and an additional two weeks a year (e.g., 38 days).”

That will give plenty of time for Javi to be a full-time dad and gym owner. And speaking of his gym, it officially opened its doors this week, but the Grand Opening celebration is scheduled for February 2. Click the link for details on how to get tickets, and click here to get stocked up on CrossFit Killshot merch so you’ll be properly swagged out when you arrive.

Another major event for Javi was supposed to be his celebrity boxing match next month in Florida, but he has been completely silent about the proposed match since just after it was announced, so I’m thinking it may no longer be happening.

Congratulations to Javi and Lauren! They sure seem to be heading towards a happily ever after in hyperdrive! We’re still over here waiting for that wedding date announcement though…

While we wait, here is a photo collage from Lauren as well as her reflections on her crazy 2018:

If you had asked me on December 31st of last year how I pictured 2018, never would I have imagined in my wildest dreams life this full. Very thankful for life’s unexpected surprises. What I’m looking forward to most in 2019 is watching these boys grow, experiencing all of Eli’s firsts, and working hard every day at the gym with my love. Wishing you all a very happy New Year! ?