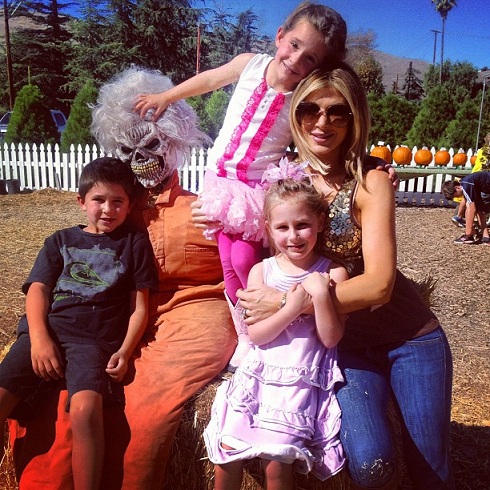 There’s not a funner or more dramatic group of peeps no the planet than the stars of Bravo’s Real Housewives franchises, and there is no better holiday for being fun and dramatic than Halloween, right? Right! Check out the ‘Wives and their families celebrating the holiday in all sorts of spooky, fun, and sexy costumes! 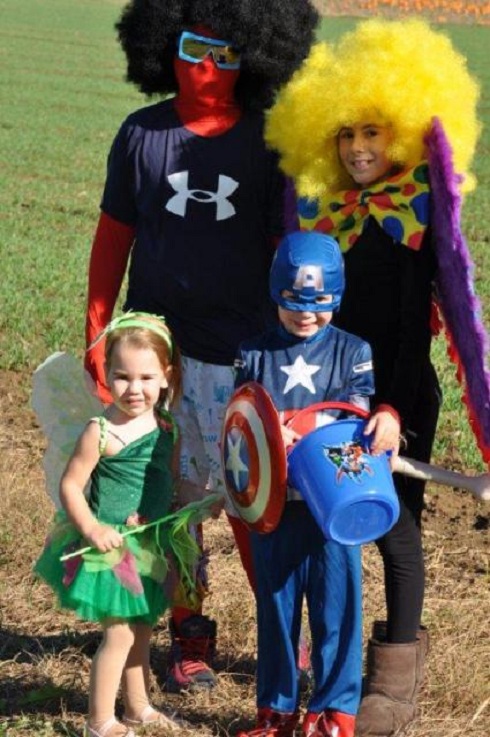 Aviva Drescher of Real Housewives of New York has yet to dress up, but she did post a photo of her four children,  Harrison, 10, Veronica, 9, Hudson, 4, and Sienna, 1, all ready for the holidays and tweeted it to her boss. “@BravoAndy #Halloweave All four! Lots of weave! :),” she wrote. 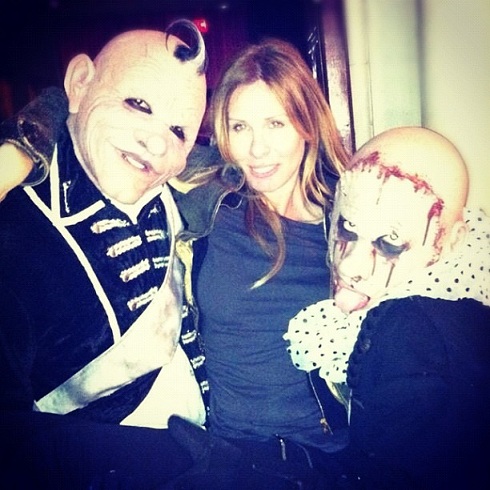 Aviva’s co-star, Carole Radziwill, didn’t dress up either — but she did get into the Halloween spirit with a few zombies. Meet my new friends .@Blumhouse,” she wrote last week. 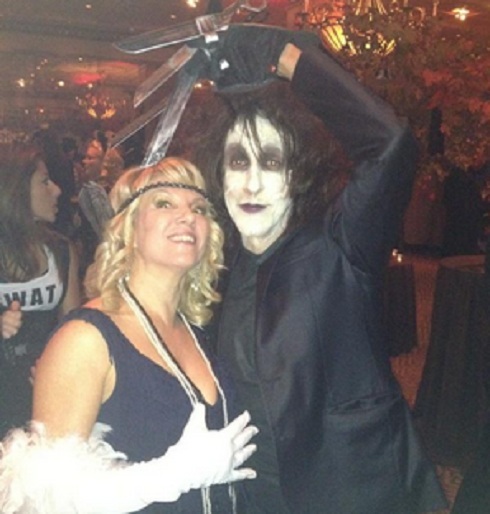 Real Housewives of New York star Ramona Singer, dressed as a flapper girl, posed with Edward Scissorhands for the photo above. 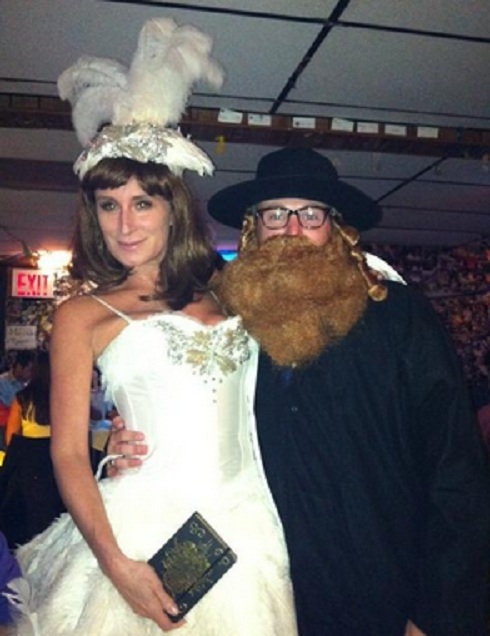 Sonja Morgan also got in on the NY Halloween fun. “With @MichaelLorber havin a ball #halliween #barmizvah reunion 20 yrs,” she tweeted over the weekend. Michael Lorber is a fellow Bravolebrity. He stars in Million Dollar Listing NY and is often seen with Miss Morgan.

And speaking of “often seen with Miss Morgan,” how about a photo of the infamous “Frick & Frack” together? 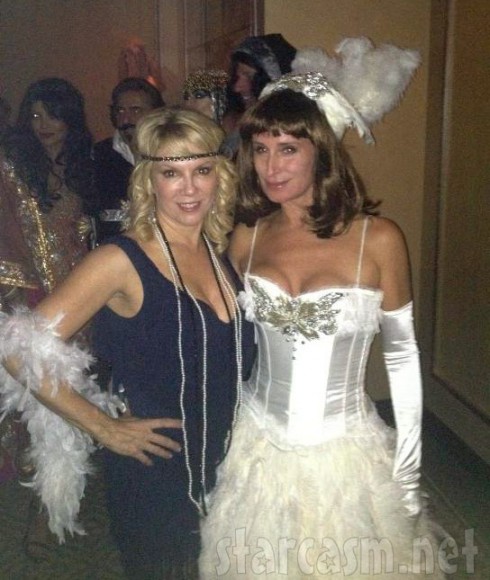 Ramona tweeted the above photo along with the words, “With @sonjatmorgan at the party in nyc” 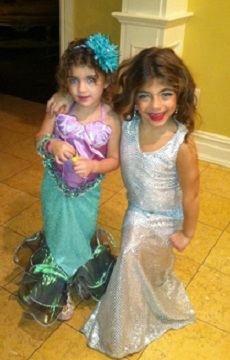 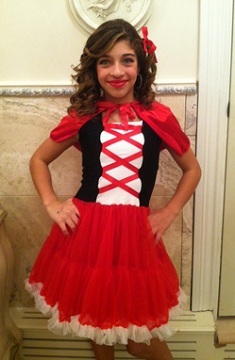 Real Housewives of New Jersey‘s Teresa Giudice hasn’t debuted her Halloween costume, but three of her daughters debuted their costumes on Twitter earlier this week including a Red Riding Hood number for Gia and the Little Mermaid for Teresa’s youngest. 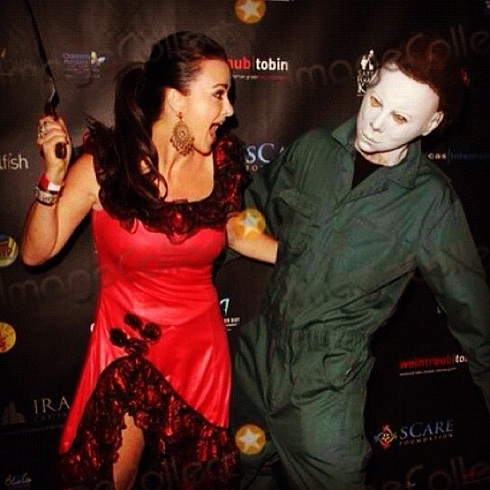 Kyle Richards got super scary when she took on Michael Myers himself — on the red carpet at the sCare Foundation’s 2nd Annual Halloween Benfit at The Congo Room in Los Angeles. “After all these years , now it’s MY turn to get Michael Myers,” she wrote. Kyle recently told press that plans to eat as much as candy corn as she can — even if that means giving herself a migraine. 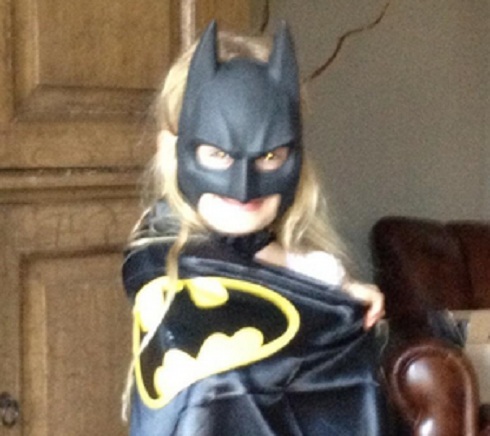 Last month, Real Housewives of Beverly Hills star Taylor Armstrong’s daughter Kennedy got Halloween off to an early start when she dressed as Batman to go see a show. “Look who went to @BatmanLiveTour last night. We had a blast! Cat woman and Harley Quinn ROCKED. And of course #Batman,” Taylor tweeted along with the photo above. 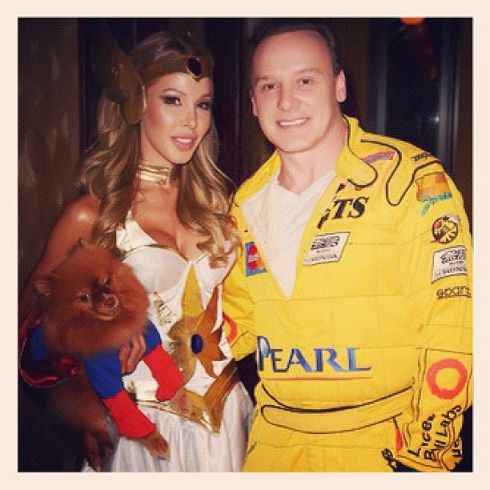 Lisa Hochstein was dressed as She-Ra over the weekend for a super hero-themed Halloween party on Miami’s Star Island. Also in attendance was her co-star Ana Quincoces who also came in super-hero attire and even brought a  gun, but don’t worry, there were no cat-fights. 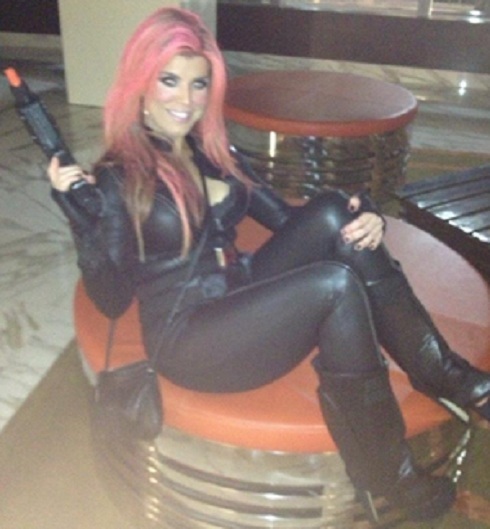 “Super heroes,” she tweeted during the event. A friend later added a photo with the caption, “@AnaQooks ready for @LisaHochstein party #theblackwidow.” 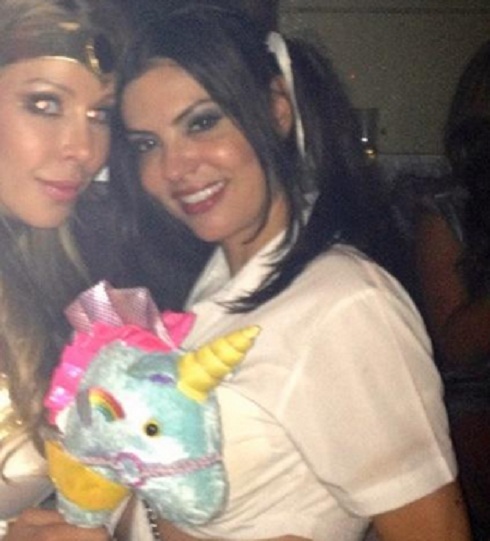 When Lisa and Ana left the Star Island party, they went to LIV Nightclub in Miami where they met up with their Real Housewives of Miami co-star Adriana de Moura, who was dressed as a naughty schoolgirl. “Had a fun time last night,” Adriana wrote along with the picture above. And here’s another picture of what could very well be the sexiest blonde/brunette combo in all of Bravolebridom! (Especially when dressed as She-Ra and a naughty schoolgirl!) 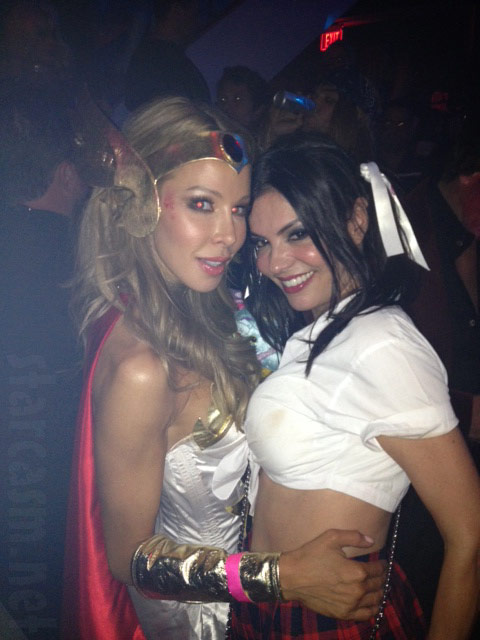 Ah heck, why not one more of Lisa Halloweenstein? In this one she is paired up with pal Mark Jiminez as a hunky Captain America: 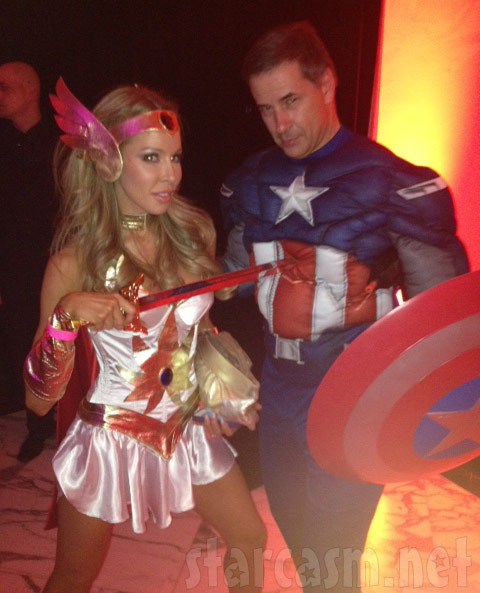 FUN FACT: The party attended by Lisa and Ana was held at Lea Black’s Star Island home which she is currently renting out. Check out the invitation to the exclusive bash below! 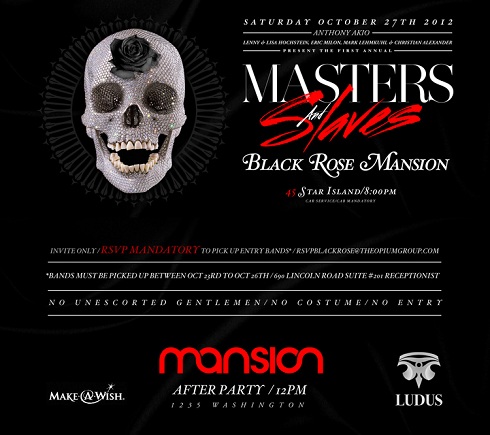