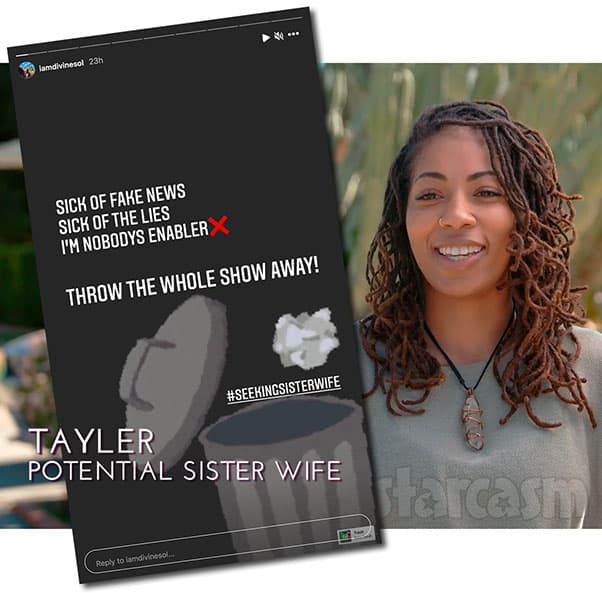 The fallout continues in the wake of abuse allegations against Seeking Sister Wife couple Ashley and Dimitri Snowden. Despite the couple’s potential South African sister wife Christeline Petersen having her restraining orders dissolved by a judge due to lack of evidence, the Snowdens’ other potential sister wife, Tayler Middleton, continues to pile on the couple and the show!

We shared a post yesterday about Tayler’s previous appearance on Couples Court with the Cutlers, and Tayler responded to our Instagram post promoting the article in the comments. “Lol now cut it out!” she wrote. “Everybody know this show is fake AF. Lol but haters gonna believe what they choose! 🤣🤣🤣”

I assumed the “fake AF” show that Tayler was referring to was Seeking Sister Wife and not Couples Court, and that assumption was backed up by Tayler’s Instagram post later in the day. She shared an animation of a piece of paper being tossed in a trash can along with this message:

The Instagram story post was shared by Christeline as well as the Snowdens’ former sister wife, Vanessa Cobb.

A woman named Ariadne Joseph also shared the story post, and Tayler later tagged Ariadne along with Christeline and Vanessa in a response. I don’t know much about Ariadne, but it appears that she was previously in a relationship with the Snowdens.

Ariadne added a little commentary to her share. “The Snowdens are abusers and TLC has allowed them to stay on air, victimizing woman after woman,” she wrote. “Never again though. Cancel the #SeekingSisterWife.”

#SeekingSisterWife Alleged abuse details from the restraining orders filed by Christeline against Ashley & Dimitri Snowden! Will they be fired from the show? Plus, info on Dimitri's 1st marriage & that time he was sued for fraud. https://t.co/5ypd9VzOa5 pic.twitter.com/Sw2W6sFMDp

Tayler later posted a still image from the trash animation in her regular Instagram feed and captioned it by writing: “🗣FOH! I said WTF I said! I know too much to be silenced!🤭🤫🤐.” She added a string of hash tags that included #bantheshow, #pullthefamily, #quitenabling, #thisshitissick, #seekingsisterwife, #seekingsisterwives, #CANCELseekingsisterwife and #TLC.

That post elicited responses from the other women tied to the Snowdens in the comments section:

ARIADNE: The Snowdens are abusive manipulators. They made all the women sign NDA’s because they knew exactly what they planned to do to them. Dimitri Snowden needs to be in prison not in reality TV! It’s all fake! Those women were all in danger and TLC didn’t say anything, no warnings. They allowed this sh*t to continue! I stand with you sis @iamdivinesol 💜💜💜

COMMENT: @christeline.petersen I loved your energy on the show. I really hope you and your girls are well and happy. I’m sorry u had to go through what you did. Best of wishes to you and I hope the Snowdens get canceled also. And Kody from Sister Wives. That’s not any way to treat a woman. God Bless.

CHRISTELINE: Your support means everything. Thank you so much for the well wishes 🙏🏼💜

One commenter requested that Tayler elaborate, but she responded with: “Pa’ran …I can’t 😔🤐”

Another commenter pointed out that Tayler and the ladies were merely calling out the Snowdens and not the other cast members. The Winder family was mentioned and Tayler replied by asserting the Winders are “very sweet people!”

She expressed frustration over potential blogs (like Starcasm?) writing articles based on her posts (like this one?). That complaint seems silly to me, especially since Tayler admits that she chose to go on a popular reality show that “everybody knows” is fake. Why else would you do that other than to get attention on social media and on blogs? Anyways…

Tayler’s post was a video of herself belly dancing and included this message:

Too many trolls ☹️😅

Here are some interactions from the comments, including Tayler’s Seeking Sister Wife co-star Tosha Jones:

TOSHA: They’re going to hate regardless. Don’t feel obligated to hide yourself away from the world. You have loads of love and support coming your way 💛💛 Hate doesn’t have a long shelf life as it’s an all consuming emotion. They’ll burn out and you’ll be left with a beautiful regrowth of love and a true following. But I get it, these half baked articles and conspiracy theories are wild. People have loads of time to waste. If you need a break do it, but never feel pressured to be less than because you’re worth all the love in the world. 💛

COMMENT: Don’t go away. We love you! Your vibe and energy is everything! 🔥

TAYLER: Are you sure?! There are some very mean people out there?! 🥺

COMMENT: Nah, as a business woman.. I thoroughly don’t understand private pages. I also understand how judgment and can affect you. I say rise above.🔥

TLC has yet to address the abuse allegations against the Snowdens. The network aired the new episode of Seeking Sister Wife Monday night as scheduled with no commentary.