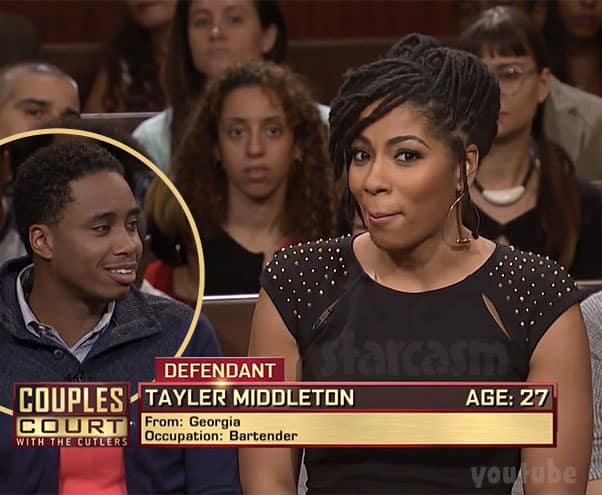 Seeking Sister Wife‘s Tayler Middleton was super eager to take her relationship with Ashley and Dimitri Snowden (And Christeline Petersen) to the next level. After visiting for just a week, Tayler announced to the Snowdens that she didn’t want to go back to Atlanta, and she was ready to move in for good.

As it turns out, Tayler is no stranger to going on TV to showcase her being in a relationship with more than one person at the same time! She was featured on an episode of Couples Court With The Cutlers alongside her trans boyfriend Jay Rowser, who suspected that Tayler was cheating on him.

According to Google, Tayler’s episode of Couples Court premiered in February of 2018, which was roughly two years before she would fly out to California for her TLC debut with the Snowdens. According to their intros, Jay and Tayler had been dating “for about a year” prior to their appearance on Couples Court. Tayler said she was a bartender at the time.

Jay told the judges that Tayler was spending a lot of quality time with a male co-worker, and she also seemed overly friendly with a male bartender who later texted her an eggplant emoji. Tayler claimed that she and the male bartender were both vegans who liked to colab on meal preps, and he was just making a joke.

There were other incidents as well, including a Sunday in which Tayler returned home very late from drinking mimosas at brunch with friends (and that particular male coworker) looking a bit disheveled.

Tayler defended herself in the third person. “Tayler wants to hang out with other people,” she argued. “Let me miss you a little bit. Let me remind myself of why you’re my boyfriend, why I’m not with them.”

Judge Dana Cutler seems smitten with the duo. “You all clearly love each other,” she tells them, before delving into their issues a bit.

Of course, Couples Court is a daytime relationship reality show, and you all know what those shows love? Lie detector tests! The Cutlers had an expert give Tayler a polygraph test. He asked Tayler: “Since the start of your relationship, have you had physical sexual contact with anyone other than Mr. Rowser?”

Tayler answered “no,” as you would expect.

The polygraph test determined that Tayler was…

The polygraph test determined that Tayler was being deceptive.

After the cheating reveal, Jay declares his relationship with Tayler “dead.”

Tayler is still defending herself. “I feel like I’ve been pushed to the edge of this relationship,” she explained.

Dana Cutler concludes by telling Tayler and Jay that the show has relationship counselors available. She tells them she thinks they are a “beautiful couple” and she hopes that they can figure it out.

Hmmmmm… I’m thinking Tayler might want to return to Couples Court (Throuples Court? Quadruples Court?) to see if she can’t work things out with the Snowdens. From what it sounds like, Ashley and Dimitri might need some help as well.

UPDATE – Tayler saw our article and she’s still close enough with Jay to tag him and laugh about the old old episode getting attention again: 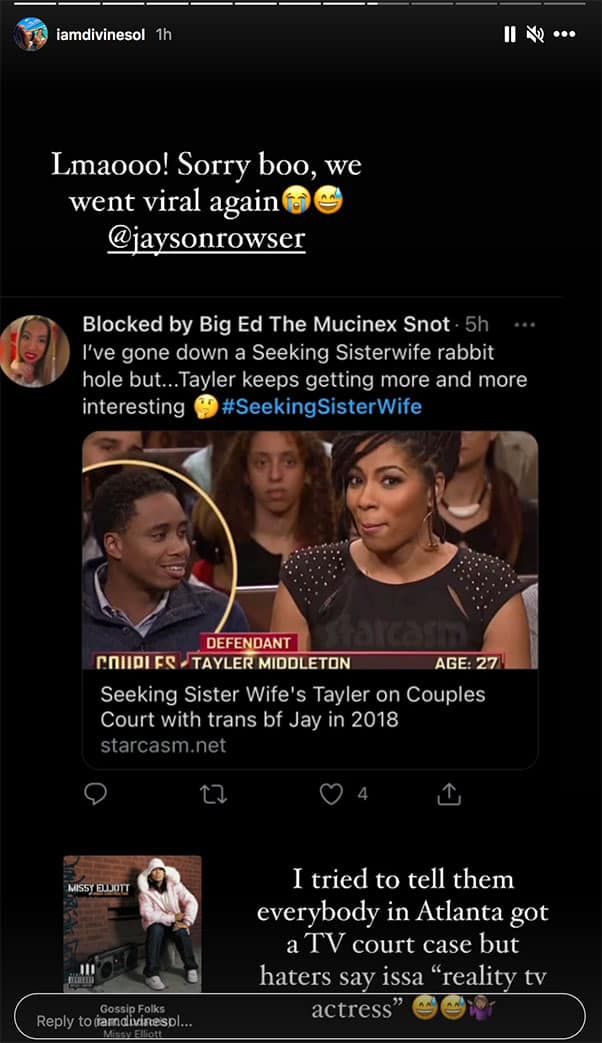 Here is the full episode of Couples Court with Tayler and Jay: