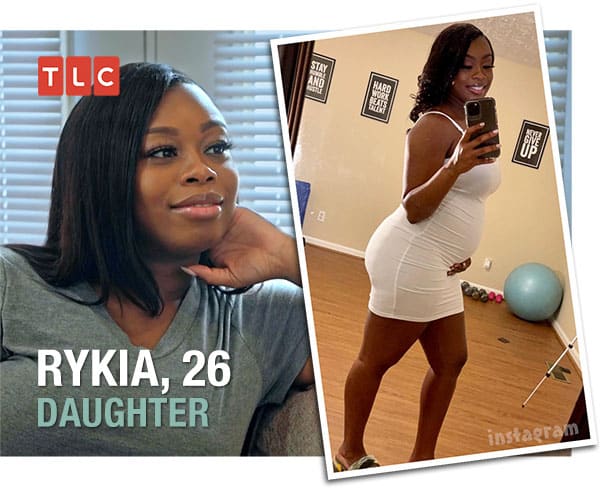 On the Season 3 premiere of TLC’s sMothered reality series, viewers get to meet 44-year-old mom Karla McCoy and her 26-year-old daughter Rykia Lewis from Jacksonville, Alabama. The mother/daughter duo are EXTREMELY close and are sure to inspire numerous memes with their willingness to give each other Brazilian waxes and watch each other’s sex tapes.

However, something that may get lost in the shuffle of shocking moments is a fact that Rykia reveals in the second half of the first episode. She’s decided to be a surrogate and she is four months pregnant!

“Being a surrogate is my only job right now,” Rykia says after her mother brings up the pregnancy on camera. “I have been in the process of being a surrogate for a while now. And, honestly, reading the profiles of the couples and their stories, it made me realize I can bless someone.”

Karla says she fully supported her daughter’s decision to be a surrogate before Rykia continues sharing her thoughts on her decision-making process.

“I know what it was like for me to give birth to my son, and being so happy in that moment. I can’t imagine what they’re gonna feel like! So, it’s a good feeling because I know that I’m doing something good.”

Despite having the best intentions, being pregnant for nine months and then giving birth can often times make it very difficult to follow through with surrogate (or adoption) plans. Was that the case with Rykia? Did she have regrets after giving birth? Not at all.

Rykia took to Instagram one week after giving birth to share side-by-side photos of her during and after pregnancy. “For the past 9 months I carried a beautiful bundle of joy for a very deserving family,” she captioned the images posted on May 4. “It will definitely go down as one of the most rewarding things I have ever done for someone else in my whole life. ❤️”

Fast forward ten days and Rykia provided another update. “When I decided to become a surrogate it was important for me to be in the best shape,” she began the caption. “But the truth is we cannot control what mother nature has in store. I knew my body would change and I was ready for that. Less than one month after giving birth and I’m close to where I once was. It’s amazing how fast the body can bounce back to its previous state. However, there are changes in my body and I have a journey ahead of me. I’m looking forward to bouncing back and being better than ever!”

Here are both posts from Rykia:

Congratulations to Rykia! Being a surrogate truly is an amazing thing to do for someone!

It’s unclear if Rykia will be sharing any information about who she is a surrogate for. Her gay Season 3 co-star Lauren and her wife Laura Leigh are trying to have a baby. (You might recall the memorable scene from the preview trailer in which Laura’s mom artificially inseminates her with a home kit.) Could it be that Rykia was Lauren’s surrogate?

To find out, be sure to tune in to new episodes of sMothered airing Monday nights at 9/8c on TLC!

If you need to get caught up on all the mother/daughter duos featured this season, be sure to check out our sMothered season 3 cast profiles post with names, photos and bios fer everybody!

Lisa Ling had a baby girl!