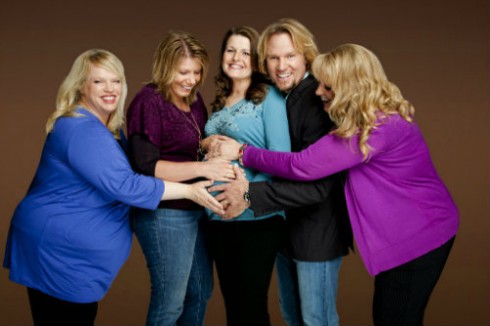 Sister Wives‘ Robyn Brown and Kody Brown are expecting their second child together — which will bring the family total to 18 kids.

“We are so happy to announce an eagerly expected new member of the Brown family,” the pair told People. It’s unclear when Robyn is due, but she is sporting a sizable bump in an exclusive People picture. (The picture at the top is from her last pregnancy.)

With so many older children ranging in age from 4 to 19, Kody said he feels he’s an expert at helping his wives get through pregnancy.

“I try to always be kind and tender, but when a woman is expecting, you have to be ultra-sensitive,” he said. “And always do the dishes.”

Earlier this year, we were the first to reveal Kody divorced wife Meri Brown in September 2014 so he could legally wed Robyn. The family later said it was a way to “legally restructure” and did not mean Kody and Meri were actually splitting up.

There hasn’t been an official announcement about the next season of Sister Wives, but TLC recently told Facebook fans that news is coming soon.