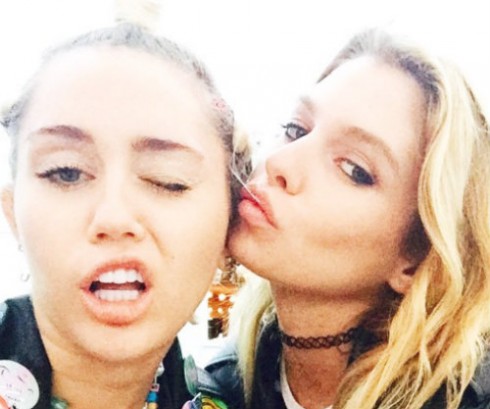 Recently, Miley Cyrus has been doing a lot of talking about her gender identity and sexuality. Specifically, she says doesn’t have rigid gender identity and could be with “anyone over the age of 18 who is down to love me.” She also said she’s been in as serious of relationships with women as she has been in with the notable men from her past, but she believes the media dismissed those romances as friendships.

Not anymore! Within the past few weeks, Miley’s also Instagrammed a couple pictures with Stella Maxwell, a 24-year-old Victoria’s Secret model from New Zealand. Now, insiders say that’s because they are a couple.

“They hold hands and hug and are very comfortable together. They’re definitely together,” one of Miley’s friends told Confidenti@l.

Speaking to V Magazine recently, Stella joked she and Miley met on Grindr, an app for finding LGBT people. But, in reality, they met through Miley’s assistant Cheyne Thomas, and it was friendship at first sight. They’ve since traveled to Las Vegas and Austin together.

“It’s been a trip to hang out and see a little of [Miley’s] world,” Stella said. “Felt very organic and right.”

As more time has passed since her breakup with Patrick Schwarzenegger, friends say Miley and Stella’s relationship has blossomed into something more and they now “have the easy affection of people who have been dating for months.”