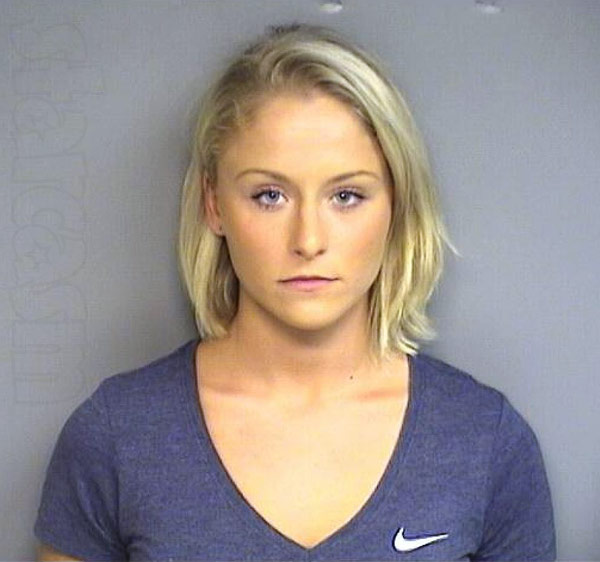 The Typo Police are real! 20-year-old Shannon Csapilla of Stamford, Connecticut faces two counts of first-degree criminal mischief after she allegedly took revenge on the boyfriend and gal pal she thought he was cheating with. What sort of revenge did Csapilla take? She keyed their cars, punctured their tires–and wrote “wore” on the girl’s car.

From the Stanford Advocate:

Lt. Diedrich Hohn said that early on the morning of Aug. 7, the cars of Csapilla’s ex-boyfriend and one of her girlfriend’s had been keyed and their tires punctured in the city. Scratched into the paint on the woman’s car was the word “wore.” Figuring there should have been a “h” in the word, police believed they had arrived at a motive for the crime, Hohn said.

According to Hohn, Shannon’s boyfriend (I assume he’s an ex at this point) began to receive text messages from Shannon which alluded to the keyed cars. The ex reportedly received at least one text message in which Shannon openly admitted to the act.

Shannon was eventually brought to the police station for questioning, but denied having anything to do with the “wore” incident. While leaving, Shannon reportedly did what perhaps many 20-year-olds would do in the same situation: she posted a photo of the station on Snapchat, along with the taunting message “Stamford police have nothing on me.”

Her declaration was apparently inaccurate, as Csapsilla was arrested and charged on Thursday. “Unbeknownst to her,” said Holm, “we did have enough and we obtained two arrest warrants from a judge and took her into custody at her home.” Shannon was later released after posting $10,000 bond.

Although Shannon is not allowed to contact her ex-boyfriend or her “wore” ex-friend, she has continued to reference the incident on social media. Before her arrest, she commented on a group Instagram photo with two of her non-ex-girlfriends: “With my wores

And she posted this selfie on Instagram on August 12–along with the caption, “If you ain’t got no haters you ain’t poppin ?”

The arrest, combined with her story going viral, seems to have changed Shannon’s attitude a bit. Just moments ago she expressed frustration with getting so much attention because of the details surrounding her arrest:

To everyone out there who thinks they “know” what happened, or simply to everyone who thinks what I did was “hysterical”: What I did wasn’t okay, but what you all are doing to me isn’t, by any means, okay either. I’m grateful to have a strong head on my shoulders, and I can only count my blessings that I am not suicidal. Would that story have gone viral as well? Punishment for my actions isn’t to be taken into the hands of the general public, but to be dealt with through the law. Of course, the whole world will state their opinions, but to think how I must feel? Don’t worry, I’m not an English major. We all make mistakes. Move on with your lives. A photo posted by @scsapilla on Aug 25, 2015 at 1:55pm PDT

Shannon’s boyfriend’s identity has not been released, but, in July, she went on a Jamaican vacation with a guy who tweeted on the day of the alleged incident: “If your gonna vandalize at least do it right.”

His most recent tweet–from just minutes ago? “Silence is golden.”