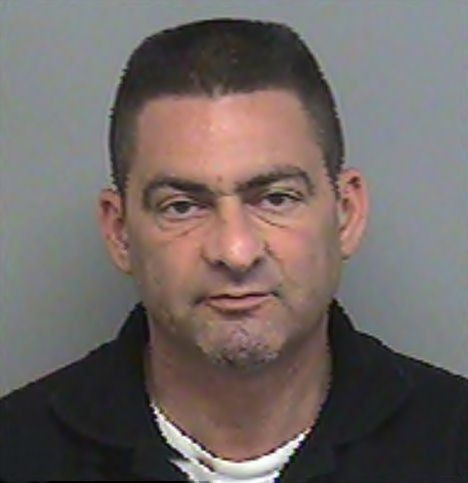 It’s only been a couple weeks since the identity of Kim Richards’ new boyfriend Ken Blumenfeld was revealed on The Real Housewives of Beverly Hills and it doesn’t appear he is fairing to well under the media spotlight. In addition to not winning over Kim’s sister Kyle Richards’ approval (even now, months after they met) it has been revealed that Ken was maintaining his match.com dating profile as recently as four weeks ago and he had a 2009 arrest for DUI back in 2009. (Ken Blumenfeld’s mug shot photo from the arrest can be seen above)

A DUI arrest may not seem like that big of a red flag, but given Kim’s admitted issues with alcohol, it’s a bit of a concern. Plus, according to a source for The Daily Mail:

“Kim thinks she’s in love with someone who cares about her, but Ken is a controlling nightmare and he’s not right for her.’

“The family doesn’t like him, he’s controlling and Kim shouldn’t be living at his house.

“Kim went through a lot last year with her drinking problem and the pressure from the show and her relationships only trigger Kim’s addiction.

“Kim should not be with this guy, he’s no good for her.”

Things didn’t get any better for Ken in Kyle Richards’ most recent Bravo blog in which she states, “I have many reasons for not thinking Ken is the right person for Kim.” Here are the two paragraphs in which Kyle talks about her first meeting with Ken Blumenfeld and some of the reasons why Kim ‘s announcement she was moving in with him impacted her so emotionally. (To read the rest of Kyle’s blog, which includes her commentary on Taylor’s ambushing of Lisa Vanderpump at Lisa’s tea party this week, CLICK HERE.)

Let’s start with Kim’s boyfriend and me meeting him for the first time. Kim did bring Ken to Paris’ premiere party, but for some reason we never actually met. It was crowded that night, and we were all off in different directions. Kim never introduced him to our sister Kathy either, so I didn’t know of any boyfriend. I started hearing about Kim’s “neighbor” Ken from my nieces. Kim had been spending time over there, but still hadn’t shared anything with any of us. Watching the show as an outsider, I think it must look strange to you that I am crying over Kim moving in with a boyfriend that she seems to be happy with. I wish it were that simple. I have many reasons for not thinking Ken is the right person for Kim. It looks as if I am crying because I want her to live closer to our family. Why do you think that is?

Unfortunately people simply cannot understand our relationship from watching a TV show. This relationship is decades in the making. Plus, there are many contributing factors that you will never see because I am not comfortable sharing them with the world. I am sorry about that. You may feel frustrated at times, angry, or curious why I have said or done certain things. For now, I have to wait until my sister is ready to speak up and explain things herself.

I’m wondering if Ken’s DUI arrest (and perhaps a history with alcohol abuse) is part of what Kyle is talking about. What do you think? Is Kyle over-reacting? Do you think Kim deserves to make her own decisions and be with whoever she wants to be with?

Either way, the Kim/Ken/Kyle triangle is bound to be a source of HUGE drama the remainder of the season!