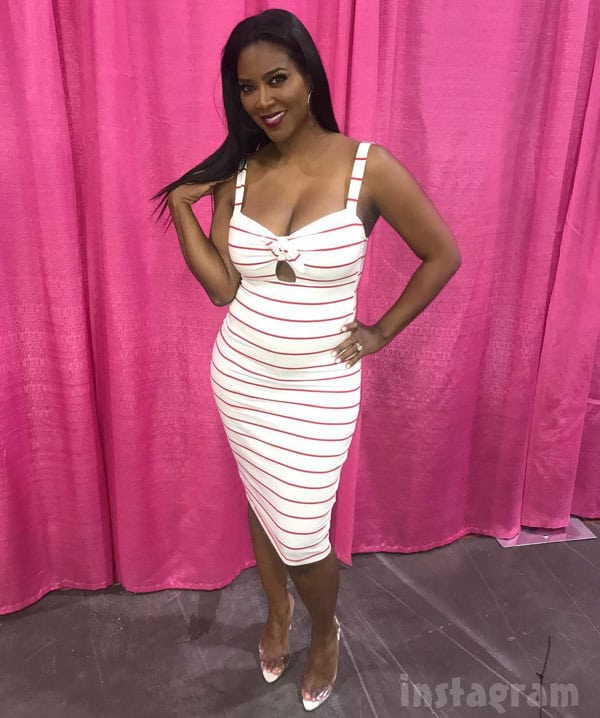 The Real Housewives of Atlanta‘s Kenya Moore may have finally put a halt to all those fake pregnancy rumors as she made her first public appearance on Saturday with her baby bump on full display!

Kenya was a keynote speaker at the Atlanta Ultimate Women’s Expo on Saturday, and she posed for a full-length photo in a tight white and pink striped dress that clearly showed the 47-year-old’s bun in the oven. “Won’t he do it?” Kenya captioned the photo, adding the ?? emoji and a string of hash tags that included #godswill, #love, #hope, #faith, #family, #God, and #peace.

For those wanting a better look, I’ve cropped and zoomed the picture a bit for you:

I should point out that just because Kenya is clearly showing in the photo, that doesn’t rule out the possibility that she is using a baby belly prosthetic — much as it was rumored that Beyonce did after her pregnant belly appeared to deflate and collapse while doing a live interview in Australia.

Normally I don’t pay too much attention to conspiracy theories, but Kenya has been saying and doing soooo many unnecessarily suspicious things over the last few months — including her awkwardly worded confirmation at the Reunion and her People interview about the pregnancy without a single recent photo — that I think there will still be some who question whether or not she is actually pregnant, even after posing for the photo above.

Regardless, Kenya looks great with a baby bump! And I do feel confident that she is planning on being a mother by the end of the year — whether it is via her own pregnancy, surrogacy, or adoption — and I’m excited to meet the heir to the “Life Twirls On” throne!

Meanwhile, I also want to give props to Kenya for being a keynote speaker at the Ultimate Women’s Expo! Let’s not let that get lost in the #bumpgate controversy. Here’s a little excerpt from the Expo’s promo blurb about Kenya:

The CEO’s monikers include Actor, Author, Writer, Producer, Beauty expert and Director. Immensely equipped with these powerful attributes, and what Kenya describes as “blessings” her fans and friends alike have come to love and respect ‘Mizz Moore’ and her hustle. We Want Moore!

Congrats on the honor Kenya! We will keep an eye out for “Moore” photos and update if we run across any additional nice bump pics.

UPDATE – I did one last check before publishing and Getty had just uploaded a small gallery of of Kenya delivering her keynote speech! Here are a few samples, which show Kenya sitting on stage on a bar stool delivering her talk:

UPDATE – and a few more! 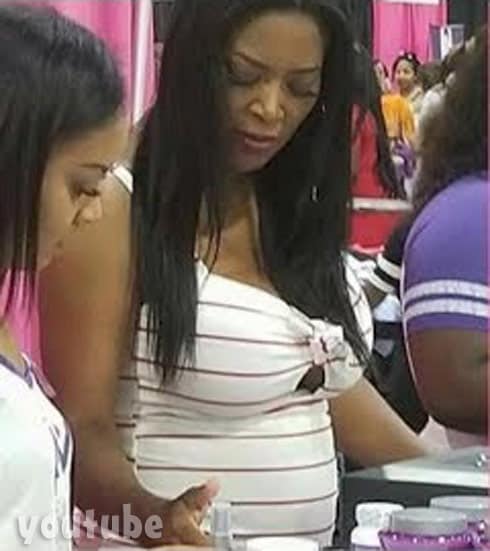 The highlight of my weekend! Connected with some amazing women, however this 8 mins of my life will be one to remember forever. @thekenyamoore it was a pleasure meeting & speaking with you! I hope you enjoy my book? #uwexpo

#KenyaMoore and her growing baby bump ?

Did Kim Zolciak really get evicted?