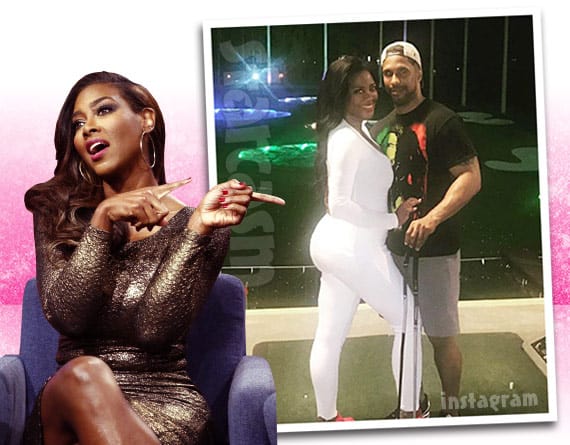 The Real Housewives of Atlanta‘s Kenya Moore seems to be taking inspiration from her idol (and self-proclaimed twinsie) Beyonce as she is currently following in the Lemonade singer’s high-heeled footsteps with her very own “Baby Bumpgate.”

Kenya recently shared a photo on Instagram with her husband Marc Daly as the two enjoyed a date night at TopGolf. The picture features a full-length side view of Kenya that had many fans demanding: “Where’s the bump?!” Kenya quickly deleted the image, but not before it was forever saved by the internet. 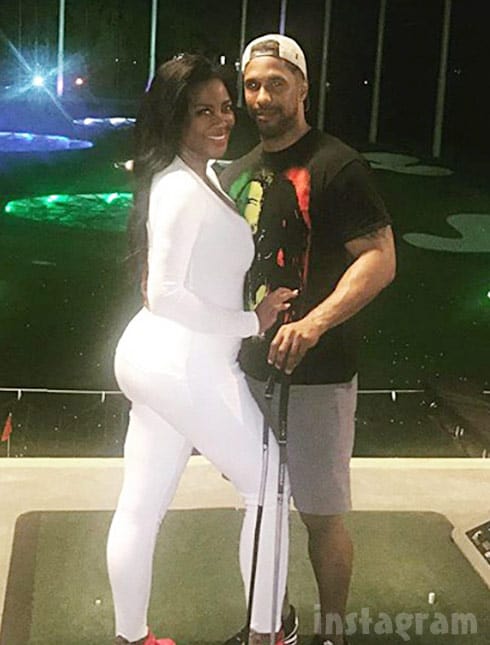 In my opinion, Kenya does look a bit thicker in the oven zone, but apparently not thick enough for numerous commenters who insisted that she didn’t appear to be more than five months pregnant as she claims. After deleting the photo, Kenya posted another picture of a drawing of a baby bump — which, of course, only added fuel to the conspiracy theory flames:

Kenya disabled comments on that photo.

On Thursday, Kenya posted another photo of herself in which she went way out of her way to mask any sort of potential baby bump, or lack of baby bump, with a drone-ish selfie from above:

Fresh face girls. Nothing like family. Thank you @chefchemoore for your killer jerk chicken. Whenever I have the craving it's right there in my freezer! Love you cuzzo

On Friday, Kenya seemed to address the fake pregnancy rumors (in addition to the fake husband, fake boyfriends, fake storyline, being fired, and fake divorce reports) by attacking Radar Online specifically. She posted a wedding photo kissing husband Marc and captioned it with:

I’m not a fan of Radar’s over-sensationalized reporting either, but Kenya really needs to reel in her outrage a bit because her attempts to be sly about all of this stuff is what leaves the door wide open to speculation and “sources” filling in the blanks. And before you (or Kenya) plays the: “Her personal life is none of your business!” card, let me point out that it literally is our business. She is a public figure — and keeps returning to The Real Housewives of Atlanta — so if she is intentionally coy about her life, people and the press are going to speculate. If you notice, her post complaining about the “fake pregnancy” news had an old wedding photo and not a pregnancy conspiracy-shattering photo of Kenya.

In case you’ve been out of the loop on the Kenya Moore pregnancy controversy, we will provide a little recap for you. Speculation that Kenya is not actually pregnant goes all the way back to her initial announcement at the Reunion. Kenya’s awkward wording and how she behaved (never once gesturing towards her belly, etc.) had many viewers (this one included) instantly suspicious. “We will definitely be welcoming a boy or girl in late this year,” Kenya told Andy Cohen.

“How many months are you?” Andy asked.

“Well, I don’t want to talk about the details because I’m just still — I’m just still very nervous about everything,” Kenya said, “and I just want to get past a safe place.”

We pointed out the very peculiar wording of Kenya’s announcement in our initial post about it, but that post also included Kenya’s tweet flat out denying that she was using a surrogate:

No surrogate but maybe my next one https://t.co/7ejd2kMrWO

We summarized at the time:

That still leaves adoption on the table though, right? We need to nail Kenya down on this! LOL. (Seriously though, her announcement seemed to awkwardly dodge any mention of being pregnant, and she never so much as gestured to her belly. It does have my conspiracy theory sense tingling!)

Kenya would soon after use the “P” word for the very first time in an Instagram post responding to questions about why she didn’t provide any details. “I was not planning on speaking about my pregnancy this early as due to my age I’m high risk,” Kenya wrote, before quickly deleting her comment.

That left the possibility of adoption (or surrogacy, if Kenya flat out fibbed on Twitter), but Kenya sealed her fate in an interview with People published on May 4 in which she specifically states that she is pregnant. Some excerpts from her interview:

PEOPLE: How did you find out you were pregnant?

KENYA: [With IVF] they specifically tell you a start date to go and take a blood test because the ones you take over the counter, the pee-on-the-stick kind, don’t always show the hormone level if it’s not strong enough … so it may give you a negative when it’s actually positive. So they rely on a blood test to show you how much of it you have in your system and how it’s progressing.

I was nervous because I hate to have my blood drawn. And then the technician who was drawing my blood said, “Did you cheat?” And I said, “What do you mean?” And she said, “Most people go and they’ll take the test over the counter.” And I said, “No because it’s not as accurate as the blood test and I just don’t want any false alarms or to be let down when I really wasn’t supposed to be and it’s only a few hours away, so why not wait and get the proper results?”

As soon as I take the [blood] test and I’m driving home, I’m like, “I should just go and get a test from the supermarket.” So I rode to the supermarket and literally took the test in the supermarket bathroom because I could not wait. It was just overwhelming. I could not wait. And it was positive. And then I got the call from the doctor later that day confirming that I was indeed pregnant and had a positive test and what my HCG levels were. She said it was all really good news. I was like, “Oh my God, I don’t know what to say!”

PEOPLE: How are you feeling in this pregnancy so far?

KENYA: I’m tired, obviously. I don’t have the stamina that I had before, so I’m taking it a little easy — not working out and going on long walks with the dogs and things like that. But it’s nothing … I don’t feel that bad. I don’t feel hyper-emotional. I have a little bit of sensitivity to smells that make me nauseous, and had a slight loss of appetite. But I’ve been okay!

PEOPLE: Are you going to find out the baby’s sex or wait for a surprise?

KENYA: We’re going to try to not find out. We want to be surprised and we want to make it as natural as we can at this point. We just want a healthy baby. And it doesn’t matter to either of us — boy, girl, we don’t really care.

Even a seemingly straight-forward interview about her pregnancy with the most reputable tabloid in the country couldn’t prevent the rumor mill from gaining steam. Why is that? Because the article didn’t have a single recent photo of Kenya showing off her pregnant belly! There are plenty of situations where a female celebrity giving an interview about her pregnancy would not require photos, but a KENYA MOORE interview with PEOPLE?! Get out! The only reason someone like Kenya wouldn’t share photos of her baby bump (or wedding) herself is because she hope to cash in with a tabloid — and People is the top of the tabs!

I’m not usually much when it comes to celebrity conspiracy theories, but there are just SOOOO many suspicious red flags here! Could this all be a smokescreen publicity stunt masterminded by an actually pregnant Kenya? If so, she deserves some sort of 21st Century Online Marketing award! If not, she deserves whatever comes to her as far as reactions from the public and from Bravo.

Either way, we will all get to see Kenya’s baby bump (fake or not) on July 21 when she hosts the Miss Amity USA pageant in Houston, Texas: 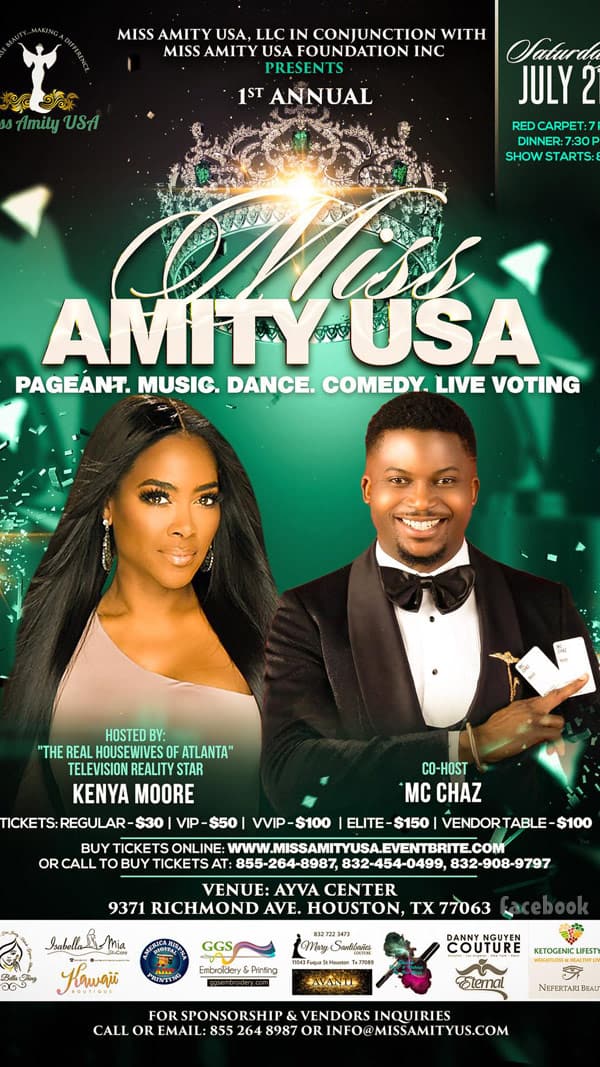 She will be more than seven months pregnant at the pageant, so there will be no way to hide her belly. And if she is faking, let’s hope she doesn’t pull a Kenyoncé by attempting to fool us all with a prosthetic baby bump. Speaking of that, I will wrap this post up by taking a trip down memory lane with an animated gif of Beyonce’s infamous deflating baby bump:

After all these years, that still blows my mind!