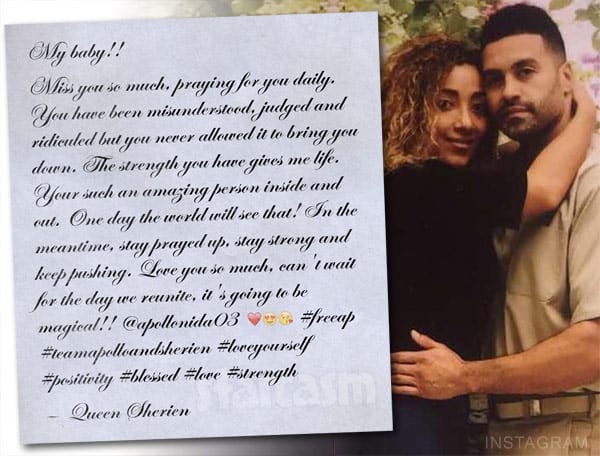 The Real Prison Fiancées of Atlanta star Sherien Almufti is making sure everyone knows how much she loves her fiance Apollo Nida! The RHOA drama catalyst took to Instagram earlier today and shared a photo of Apollo along with the following message about his awesomeness and misunderstooditude:

My baby!! Miss you so much, praying for you daily. You have been misunderstood, judged and ridiculed but you never allowed it to bring you down. The strength you have gives me life. Your such an amazing person inside and out. One day the world will see that! In the meantime, stay prayed up, stay strong and keep pushing. Love you so much, can’t wait for the day we reunite, it’s going to be magical!! @apollonida03 ❤️?? #freeap #teamapolloandsherien #loveyourself #positivity #blessed #love #strength

The Apoll-ode is just the latest PDA from Sherien on Instagram, and as you might expect, it inspired more than a few judgmental comments. On a previous photo of a shirtless Apollo posted by Sherien, one of her supporters clapped back at a “hater” by pointing out “Some people just don’t understand what being a prison wife entails. #IMakeItLookEasy You’re doing something right you got people hating on you for no reason.”

Sherien agreed. “Ugh!! They don’t understand what wife, prison or love is, It’s actually sad to see how many people are lacking love ?” Sherien wrote. “Stay sweet and thank you for the support,” she added; “its greatly appreciated ?❤️”

Sherien isn’t alone in the Instawoo game as Apollo Nida — or at least his instagram account — has been expressing his admiration for Sherien fairly consistently as well. “My baby @queensherien is so beautiful,loving,kindhearted and amazing,” one caption for a photo of Sherien reads. “Thanks for all the support. Your drive is what keeps me strong and i love you for that. #thenidateam #freeapollo” 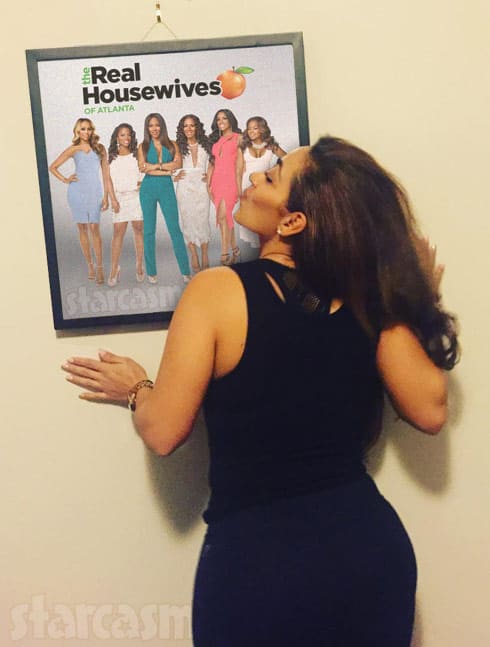 Meanwhile, Sherien’s other passionate relationship (with reality television) looks like it may be the real thing too. That relationship also takes work and dedication, and Sherien seems very up to the task. Here she is schmoozing with Mama Joyce, the nemesis of Apollo’s estranged wife Phaedra Parks:

That is straight from page one of Sun Tzu’s The Art of Drama right there! Something tells me Apollo and Sherien (Apollerien? Sherollo?) are going to be together for quite a while. It will be interesting to see how Bravo handles her status on the series — whether or not they will be willing to make “the other woman” an official “Friend of the Housewives” or even a full-fledged Real Housewife! Stay tuned…

UPDATE Is this the guy who could have had it all with Adele, inspired Grammy-winning “21”?