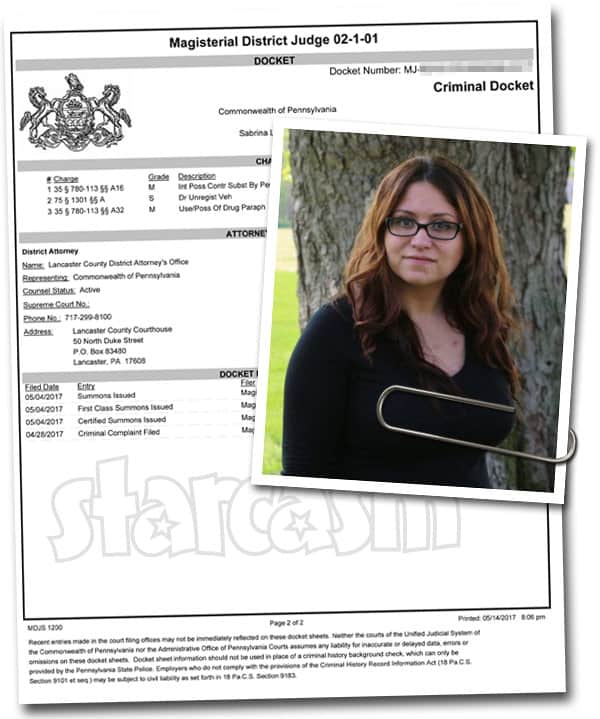 We have some very unfortunate news to report for fans of Return To Amish, as we can exclusively reveal that show star Sabrina Burkholder (aka Sabrina High) is currently in jail in Pennsylvania after being arrested for drug possession and other charges.

Sabrina was officially booked May 11 on charges stemming from an incident on April 23. According to online records, Sabrina is facing the following charges:

At the time of her offense, Sabrina was on probation from a previous charge of Hindering Apprehension or Prosecution. Sabrina pleaded no contest to that charge on January 5 of this year, and received one year of probation.

The Hindering Apprehension charge may have been tied to the incident late last year in which Sabrina’s friend died of a heart attack while in her car. The criminal offense took place in August, and, in late August, Sabrina posted about losing custody of her daughter Oakley due to her friend’s passing.

Sabrina appears to still be in custody; her arraignment hearing is scheduled for Friday morning. It is unclear who is taking care of her children, including her 5 1/2-month-old daughter Arianna Grace.

UPDATE – We have the results of Sabrina’s hearing, at which she entered a guilty plea for all three charges. Click the link for more details.

As readers of our site know, we are big fans of Sabrina, and we are extremely saddened by the news of her latest arrest. I will try to remain optimistic and hope that her time behind bars will be the final wake up call that allows for Sabrina to finally get her life straightened out.

Meanwhile, it is unclear just how much of Sabrina’s legal issues will play out on screen this season — we will all just have to tune in and see. New episodes of Return To Amish air Sunday nights at 8/7c on TLC.