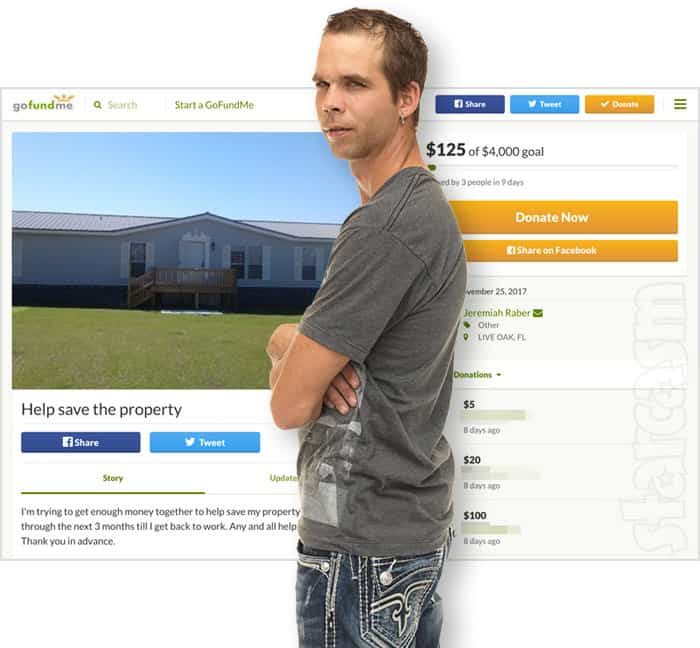 The last time we checked in with Return To Amish star Jeremiah Raber, his wife Carmela had run off with the $15,000 in cash the couple received from selling some property next to the lot on which they built their house. Carmela returned to Washington state with the cash (and Jeremiah’s clothes and camera), and she appears to be doing well as she focuses on being a single mom again. Meanwhile, Jeremiah is back in Florida after a trip to Ohio to visit family, and things do not appear to be going as well for him — at all.

In addition to his previous ex-wife suddenly denying him access to his children, Jeremiah is also having some financial problems and is at risk of losing the new home viewers saw him purchase with Carmela on the most recent season of Return To Amish. To try to keep up with the mortgage payments, Jeremiah launched a “Help save the property” GoFundMe campaign with a goal of $4,000. Here is the campaign description from Jeremiah:

I’m trying to get enough money together to help save my property and help me get through the next 3 months till I get back to work. Any and all help is appreciated. Thank you in advance.

As is the case pretty much any time a reality star launches a GoFundMe account for something other than a medical emergency, Jeremiah received some criticism on social media. One of the most common things that detractors wanted to know is why Jeremiah is asking for money when he doesn’t have a job — outside of being on Return To Amish, which may have wrapped its final season in 2017.

Jeremiah tackled that question with a YouTube video titled “Time for the truth.”

From Jeremiah in the video: 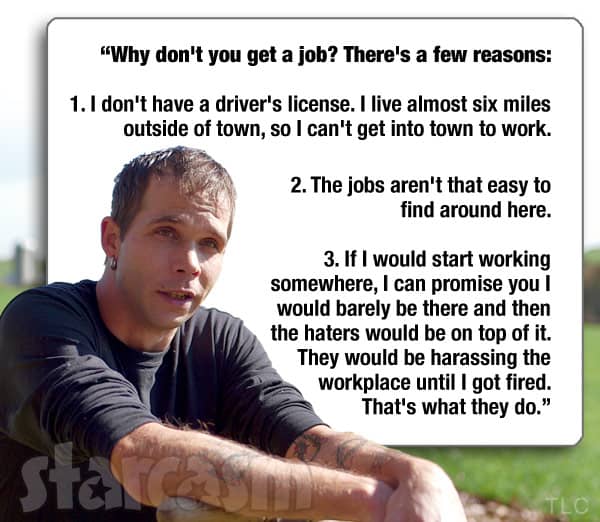 And speaking of the haters, Jeremiah returned to YouTube one day later to offer up an Eminem style freestyle rap calling out the haters for their bullying tactics–before coming to the conclusion that the only way to fight them is to join them and bully them right back:

In the clip explaining his financial woes, Jeremiah revealed that he has a new song he will be recording in an actual studio and that it will have a real deal music video to go with it! He also promised something big to come right around Christmas time. (It’s unclear if the “something big” is the music video.)

If you want to help Jeremiah out but do not wish to donate to his GoFundMe campaign, you can always purchase something from his line of clothing and accessories — which now includes a Christmas sweater and a pillow with photos of Jeremiah on it.

On a positive note, Jeremiah says that when he was in Ohio he had an “amazing” meeting with his parents and that they now have a much better relationship. Also, Jeremiah has a new dog named Fluffy that is currently serving as his YouTube sidekick. Jeremiah had better be careful, however, because Fluffy is a natural entertainer and the roles of “star” and “sidekick” may soon be reversed!