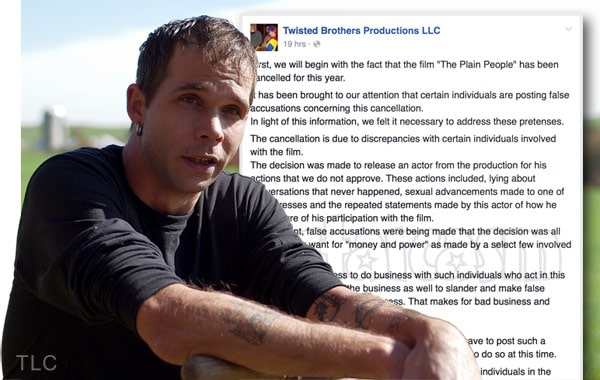 It was announced late last year that Breaking Amish star Jeremiah Raber would be making the transition from the small screen to the big screen as an actor in the Amish-themed horror film The Plain People. But, after more than eight months’ preparation, the filmmakers have announced the project has been canceled because they were forced to release one of the actors for several reasons, including “sexual advancements made to one of the actresses!”

We were first made aware that production might be having some issues when someone on Twitter responded to our post about the new Return To Amish preview trailer by tweeting that Jeremiah “was kicked off The Plain People movie.” Needless to say, we were a bit shocked:

@CelebrityHQPics He was kicked off The Plain People?! Lawdy lawd!

Jeremiah himself responded to our shocked tweet by assuring everyone it was all a big misunderstanding and that the “owner” says he is still involved with the movie:

@starcasm @CelebrityHQPics no I wasn’t The a hole isn’t even the owner of it
he’s just the writer. Owner says I’m still on and he’s off

Meanwhile, Short Story Phototography‘s Lindsey Stoops, wife of The Plain People writer, co-director and co-producer Tom Stoops, seemed to confirm the reports that Jeremiah was booted from the film:

@jeremiahraber @starcasm @CelebrityHQPics are you THAT delusional? Tom is the writer, and the legal owner.

UPDATE – Jeremiah and his newlywed bride Carmela Raber have issued statements about The Plain People to Examiner. “People make mistakes and I’m one of them,” Jeremiah says. “In no way am I saying what I did was right but I can promise that it wasn’t what others made it out to be. Me and Carmella have worked through it and will stand strong til the end.”

“Just wanted to say I’m fully aware of what happened,” Carmela said. “We are trying to get through this tough time…We’ve all made mistakes in life, Jeremiah and I had a rocky start and this would be one of our worst and in order to get to the better we have to overcome this situation.” She continued to say that she doesn’t want sympathy and that she and Jeremiah “will get through this” with God’s help. She concludes with the humble request: “Please keep us in your prayers.” CLICK HERE for their full statements, as well as a statement from The Plain People producer Jim Kuhn in which he says he and his son came up with the concept for the movie.

(I should point out that Tom Stoops is listed as the owner of Twisted Brothers Production, which was the production company making The Plain People.)

Speaking of Twisted Brothers Production: after all of the confusion about what happened and the many allegations floating around, they issued this official statement verifying that production had halted — but did not go so far as to name any names:

First, we will begin with the fact that the film The Plain People has been cancelled for this year.

It has been brought to our attention that certain individuals are posting false accusations concerning this cancellation. In light of this information, we felt it necessary to address these pretenses.

The cancellation is due to discrepancies with certain individuals involved with the film. The decision was made to release an actor from the production for his actions that we do not approve. These actions included, lying about conversations that never happened, sexual advancements made to one of the actresses and the repeated statements made by this actor of how he wasn’t sure of his participation with the film. At that point, false accusations were being made that the decision was all based on our want for “money and power” as made by a select few involved in the film.

We are not in business to do business with such individuals who act in this manner. We are not in the business as well to slander and make false accusations of others in the process. That makes for bad business and moreover is unprofessional. We will not tolerate such behavior. It is unfortunate of what has occurred and that we have to post such a statement, but we felt that it has become necessary to do so at this time.

We are currently in discussions with some well known individuals in the entertainment business and their involvement in future projects. We are looking forward to producing these projects for your enjoyment and we will have more postings as progress is made with these future projects.

In case you were curious, here are a couple of official production descriptions for The Plain People: 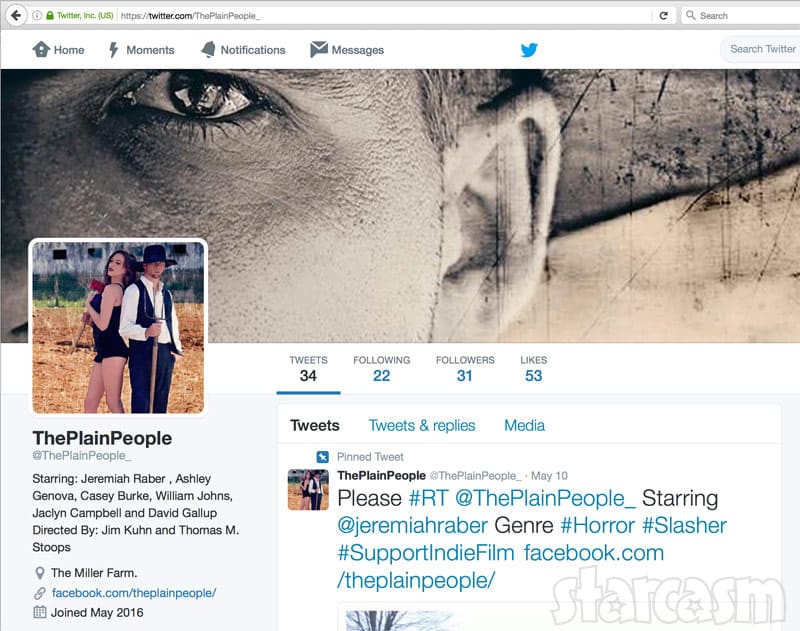 The Plain People starring Jeremiah Raber from TLC’s Breaking Amish begins filming in late Spring 2016. Synopsis: A family vacation to Upstate New York is put on hold after their vehicle stalls in the remote Amish countryside town of Indian Run, Pennsylvania and turns into a battle of survival for their life as they learn the locals are not who they appear to be. The Miller family, led by Jeremiah Miller (Jeremiah Raber – TLC Breaking Amish) does not like outsiders entering his community especially trespassing on his homestead. What the outsiders learn about the Millers will have them questioning their faith along with their survival to escape Indian Run.

THE PLAIN PEOPLE
Two young couples on their way to Niagara Falls find themselves stranded on a farm owned by who appear to be a plain, Amish husband-and-wife. Unfortunately, the innocent travelers are taken captive and are the focus of the most heinous, sacrificial ritual at the hands of the brutal, psychotic husband-and-wife duo.
‪#‎theplainpeople‬ ‪#‎slashermovie‬ ‪#‎horror‬ ‪#‎twistedbrothersproductions‬ ‪#‎mrhollywood‬

As a matter of fact, Jeremiah has already moved on to another production called The Metaphysical Force, which he describes as “my own movie.” Here’s a synopsis:

Two complete strangers find that they possess evil powers and are controlled by the dark forces but they want to get rid of it. After living life in misery and thinking they are alone in this world with the problem and being made fun of by friends they search online to find a cure for it. In the process they find news articles about the other one so they decide to connect and try to put a stop to it once and for all. Sparks are lit in their hearts at first site but the burden of it all keeps feelings trapped inside. The only real cure is true Love but can they set aside their insecurities and save each other?

And a new movie isn’t the only thing the infamous Jeremiahntrepreneur is up to. With summer upon us, he is looking to ramp up his Amish donut business once again and hit the Pennsylvania fair circuit. From Jeremiah last month:

We are getting closer to the PA. County fairs to start which means I will be back on the road with my doughnuts again. Last year we had a decent year with them but we were limited to the amount we could put out and the places we could go to due to not having enough equipment. That’s the reason I started the “kickstarter” in hopes of getting it to where I need it to be able to keep up with the demands. If you live in PA then I hope to see you at one of your local county fairs!!!

Jeremiah’s Kickstarter campaign included a video featuring Mama Mary Schmucker: Unfortunately, Jeremiah came up a bit short on his $18,000 goal; he had raised only $141 when the campaign expired on June 13.

If you’re curious to know more about The Plain People shut down and/or Jeremiah’s donut empire, be sure to tune in to Return To Amish when it returns to TLC on Sunday, July 10 at 9/8c. I can’t guarantee either will be featured, but I do feel pretty confident that his donuts will be if Mama Mary Schmucker is involved. 🙂