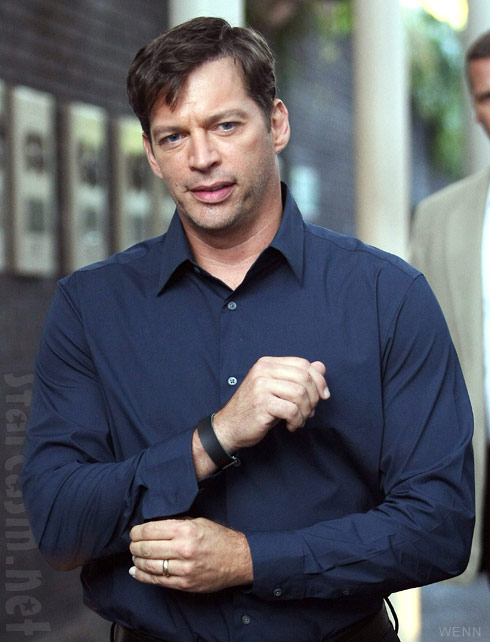 Singer (and super-hunky sexpot — I’m just sayin’) Harry Connick Jr is reportedly inking a deal to become the newest American Idol judge alongside Jennifer Lopez and Keith Urban. The Hollywood Reporter, who has been all over the Idol personnel changes, says Harry joined Keith, J-Lo and former judge (now mentor) Randy Jackson at a celebratory shindig hosted by the show’s producer, Simon Fuller, where they all toasted the forthcoming announcement.

Harry Connick Jr. has appeared on American Idol several times as mentor and performer, and landing the judge job wasn’t out of the blue by any means as THR was listing him as a viable contender for some time. It was assumed the show would try to fill out the judges’ table with an “industry professional” as opposed to another performer, but after talks with songwriter/producer Dr. Luke fell through earlier this week, producers were under the gun to bring someone in soon to avoid delaying production on the upcoming season.

Though there has been no official confirmation from Fox on Connick’s signing, judging from Ryan Seacrest’s tweet yesterday, it won’t be long before we hear something:

Got some @AmericanIdol news for you coming very soon…

And although Harry Connick, Jr. has remained quiet about it as well, he did retweet this funny comment on his Idol courtship from former American Idol judge Ellen DeGeneres on Thursday:

So what do you think about Harry Connick Jr. being the next judge on American Idol? And how do you feel about the team of J-Lo, Keith Urban and Harry? Will it be enough to stop the American Idol ratings freefall?

American Idol final two: Up To The Mountain and Beautiful Day video with lyrics