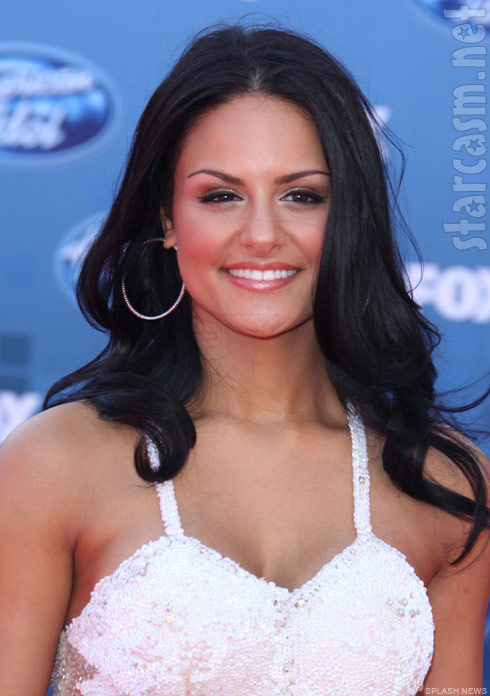 On what should have been her night to shine, the prematurely rejected Pia Toscano was in attendance for the America Idol finale last night looking flawless as usual in a sparkly white textured mini-dress with some (tasteful) see-through lace.

I have to confess that I haven’t watched a single episode of AI since Pia’s surprise exit weeks ago and I don’t even know who was in the final. (Although I have seen a lot of American Idol articles that look like Mad Magazine covers, so I’m assuming Snarly McSneery made it.) That fuzzy wuzzy Nirvana-slaying Seth Rogan dude better have made it because it was his rescue that led to Pia’s irreversible dismissal in the first place!

Enough with the negative – let’s focus on the positive – namely Pia Toscano being positively beautiful!

(Anyone else getting a Mila Kunis vibe here?)

I had predicted shortly after her elimination that Pia would have a number one album by the time the finale rolled around and although that hasn’t come to fruition I would still be willing to wager a few bucks she will whip some Billboard butt head to head with whoever won tonight! Stay positive…

Here’s one last loooooooooong look at Pia before she returns to the studio before resurfacing for the American idol finalists tour this summer: